Disney Wiki
Register
Don't have an account?
Sign In
Advertisement
in: Disney on Ice shows, Tangled, The Little Mermaid,
and 12 more

Disney on Ice: Find Your Hero

Disney On Ice: Find Your Hero (previously known as Rockin' Ever After and then Magical Ice Festival and then Reach for the Stars) is a Disney On Ice show that premiered in September 2012.

Stories represented in the show: 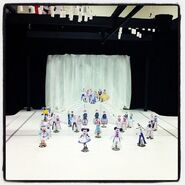 The original poster with Merida

The 2015 poster with Elsa, Anna and Olaf

Disney On Ice: Reach for the Stars 2017 poster