Disney on Ice: Road Trip Adventures is an interactive Disney on Ice show which premiered on September 6, 2019.

Mickey Mouse, Minnie Mouse, Goofy, and Donald Duck take selected participants on a road trip involving many Disney stories such as the remake version of Aladdin, Moana, The Lion King, Toy Story 4, Frozen, Mary Poppins Returns, and the return of The Incredibles.

Audience members can also play carnival games and enjoy a dance party done by their favorite princesses such as Snow White, Belle, Mulan, Tiana, Ariel, Rapunzel, Merida, and Cinderella. Alice and The Mad Hatter also join in the finale as well.

Moana and the hula dancers

Frozen
Add a photo to this gallery 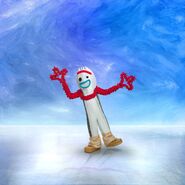 Forky's first ever live appearance.
Add a photo to this gallery

Retrieved from "https://disney.fandom.com/wiki/Disney_on_Ice:_Road_Trip_Adventures?oldid=3948144"
Community content is available under CC-BY-SA unless otherwise noted.