Disney Wiki
Register
Don't have an account?
Sign In
Advertisement
in: Disney on Ice shows, The Little Mermaid, The Lion King,
and 9 more

Disney on Ice: Worlds of Enchantment

Disney On Ice: Worlds of Enchantment (formerly known as Worlds of Fantasy) is a show that takes you into four Disney Fantasies. It opened on August 21, 2008 and closed on March 2020.

Worlds of Fantasy is a show that takes you into six Disney Fantasies. The first act of the show features the on-ice debut of Lightning McQueen, Mater and the crew of Disney·Pixar's Cars, along with Disney mainstays The Little Mermaid, Toy Story 3 and Frozen.

This show also includes a first for the Disney On Ice franchises, with a one hour pre-show centered around various Disney Princesses and giving guests the chance to see various Princess' gowns and mementos up close and personal. The first variant of this show was the final Disney on Ice show to feature Wayne Allwine, Mickey Mouse's longtime voice actor, prior to his death in May 2009. When it was overhauled, Bret Iwan would take over the role of Mickey.

The following movies are represented in the show:

The previous stories represented in this show were:

The first variant of the show which debuted in 2008.

Alternate Worlds of Enchantment poster from 2017 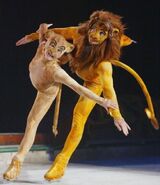