Disney on Parade: 100 Years of Magic

Disney's Dreams On Parade: Moving On

Following the parade's final run on January 21, 2003, five of the parade's floats (the first four and the Alice in Wonderland float) were recycled for Disney on Parade at Hong Kong Disneyland, which ran from 2005 to 2010.

The parade was held in honor of the 100th anniversary of Walt Disney himself, which was on December 5, 2001. The history of Disney movies, starting with Mickey Mouse's animation production, was reconsidered in three periods, matching the flow of American entertainment. The total length was 700m, the initial stage was composed of 14 floats.

Hong Kong Disneyland was originally scheduled to receive Disneyland's long-running Parade of the Stars, which debuted for its 45th anniversary celebration in 2000 and was replaced with Walt Disney's Parade of Dreams in 2005. However, officials ultimately decided on a different parade for the new park. The parade was also the genesis for an epiphany of then-CEO Bob Iger which led to the $7.4 billion acquisition of Pixar Animation Studios in 2006. Iger's epiphany was that many of the characters in the parade were from Disney films that were made prior to the mid-90's with the recent characters being from Pixar's films and at that point, the Disney/Pixar collaboration was nearing its end.

During the Christmas season, Disney On Parade became 'Let It Snow' Christmas Parade. The parade itself was a modified edition with Christmas additions, decorations and replacements. It first ran from November 23, 2007 through January 6, 2008 as part of the A Sparkling Christmas Holiday event. Since then, the parade has been running in each Christmas event until January 2, 2011. 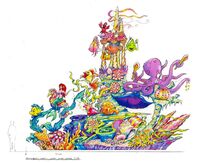