The Wonderful World of Disney
"Disney on Parade"

"Disney on Parade" is an episode of The Wonderful World of Disney that aired on December 19, 1971.

This show features highlights from the first edition of of the popular arena show Disney on Parade, including acts based on the films Cinderella, The Jungle Book, Alice in Wonderland, and Dumbo. The show was videotaped in Adelaide, South Australia during the show's 1971-72 Australasian tour. 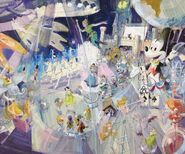 Title card from 1998 reairing
Add a photo to this gallery
Retrieved from "https://disney.fandom.com/wiki/Disney_on_Parade_(episode)?oldid=3923519"
Community content is available under CC-BY-SA unless otherwise noted.