Various, with elements of Classic Disneyland laced throughout

Disney's Fantasia Shop
Small World Gifts & Sundries
The Disneyland Hotel is a hotel at the Disneyland Resort in Anaheim, California that opened on October 5, 1955 as the first Disney hotel. However, it was actually owned by Jack Wrather under an agreement with Walt Disney to use the Disneyland name but would not be acquired by Disney until 1988. Due to the addition of Downtown Disney in 2001, the hotel and its amenities were downsized.

At the time of its construction in the early 1950s, Disneyland was in a remote area outside Anaheim, California. Walt Disney wanted to build a hotel for Disneyland visitors to stay overnight since Disneyland was quite a drive from the established population centers of Southern California at the time. However, Disney's financial resources were significantly depleted by the construction of the park, so he negotiated a deal with Jack Wrather and his business partner Maria Helen Alvarez under which Wrather-Alvarez Productions would own and operate a hotel called the Disneyland Hotel across the street from Disneyland. Wrather was a Texas oil millionaire turned film producer who already owned hotels in Las Vegas and Palm Springs and co-owned television stations in Tulsa and San Diego with Alvarez.

When Michael Eisner became chairman and CEO of Walt Disney Productions in 1984, he wanted to get out of Disney's agreement with the Wrather Corporation and bring the Disneyland Hotel under The Walt Disney Company's umbrella. Wrather refused to sell, just as he had refused Walt Disney many years before. Wrather died two months after Eisner took over Disney and five years later, in 1989, Disney bought the entire Wrather company. At the time, Wrather's company also owned the RMS Queen Mary and Hughes H-4 Hercules (the "Spruce Goose") in Long Beach, as well as the rights to The Lone Ranger and the Lassie TV series. Though Disney kept the hotel, it sold the other assets that came with the purchase.

In 1999, a significant portion of the hotel was demolished to make way for Downtown Disney and new parking areas for the Disneyland Resort's big expansion. Most buildings east of the Sierra Tower and north of the Marina Tower were demolished, including the original hotel buildings from 1955. The only buildings remaining in these areas are the convention center and the parking garage. Recreational facilities were built in the quad between the three towers, previously the site of Water Wonderland, to replace those that were previously located east of the Sierra Tower.

Streets previously used to access the hotel by car were regraded and/or outright eliminated and a new street was built to access the hotel. Tram service to and from the hotel was also discontinued, leaving the Monorail as the only vehicular mode of transportation from the park to the hotel. The loss of hotel rooms was offset with the opening of Disney's Grand Californian Hotel & Spa on January 2, 2001, but many of the restaurants and amenities that existed at the Disneyland Hotel prior to 1999 were never replaced.

Today, none of the original hotel buildings from 1955 remain standing. Very little of the hotel other than parking areas and service facilities sit outside of the perimeter created by the three remaining guest room towers. Original signs and other artifacts from several of the shops and restaurants that were demolished in 1999 are on display in the hotel's employee cafeteria.

The ESPN Zone, Rainforest Café, and AMC Theatres, all Downtown Disney venues, now occupy much of the former hotel space east of the Sierra Tower.

Mickey Mouse theming has since been employed in many interior furnishings and details throughout the hotel.

In 2007, the Marina, Sierra, and Bonita Towers were renamed Magic, Dreams, and Wonder, respectively.

A new Downtown Disney Monorail station was built on the same site as the former Disneyland Hotel station and still takes guests to and from Tomorrowland inside Disneyland Park along the same beamway that existed prior to the expansion.

The hotel underwent another major series of renovations between 2009 and 2012, including new windows, wallpaper, carpeting, and decor.

The Neverland Pool area also underwent a major transformation to include 6 new cabanas, two new water slides featuring the iconic original park signage at the top, and a replica Monorail train on the top of each slide. A new four-foot pool was built between the Neverland Pool and water play area.

On May 25, 2011, two new dining locations opened at the hotel, replacing Hook's Pointe, the Wine Cellar, Croc's Bits & Bites, and The Lost Bar--Tangaroa Terrace, and Trader Sam's. Tangaroa Terrace offers a casual dining experience in a Tahitian-style building based on Adventureland and its attractions. Trader Sam's, based on the Jungle Cruise's head salesman, is a bar. These two locations are rather small inside, but offer plenty of outdoor seating, including seating by a giant fireplace near the entrance to the pool area. 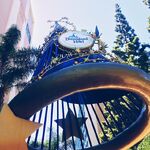 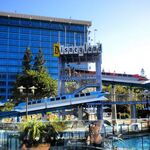