Motors on each car

Viewliner Train of Tomorrow
The Disneyland Monorail System is a monorail line that operates at the Disneyland Resort in Anaheim, California. It has been operating since June 14, 1959. It was the first permanent monorail system to operate in the western hemisphere, and is similar to the Walt Disney World Monorail System.

The monorail originally opened as Disneyland-ALWEG Monorail System on June 14, 1959, and was not a transportation attraction. It was only a sightseeing attraction in Tomorrowland. In 1961, the track was extended to 2.5 miles to transport guests to and from the Disneyland Hotel.

In 1999, the monorail began lengthy closures and limited capacity due to the construction of the new Disney California Adventure theme park, which already existing monorail tracks passed through. In 2001, the monorail began running full capacity again and passed through the new park, as well as the hotel within the park, Disney's Grand Californian Hotel and Spa. The Disneyland Hotel station was converted to the Downtown Disney station, themed to the adjacent Rainforest Cafe. In 2004, Monorail Orange was taken off the line and taken to Walt Disney Imagineering in Glendale to be reverse-engineered. Monorail Blue was removed from service in September 2006 and was shipped away to also be rebuilt. The monorail was closed from August 21 through late December 2006 to prepare for the opening of Finding Nemo Submarine Voyage in 2007. For the opening of Finding Nemo Submarine Voyage on June 11, 2007, the livery of Monorail Red was changed to almost completely yellow, with the Finding Nemo Submarine Voyage logo on the middle car. Monorail Red was then changed to promote the Year of a Million Dreams promotion.

The Mark I trains were not built by ALWEG, who only built the beamway. They were built at the Disney Studio by Bob Gurr and ran from 1959 until 1961. This fleet consisted of two trains, Monorail Red and Monorail Blue, which each consisted of only three cars.

The Mark II trains were introduced in 1961 when the monorail track was extended to the Disneyland Hotel, and the attraction became an actual transportation system. The two monorails from the Mark I fleet were modified by Disney Studios to become Mark II trains and were joined by a third train, Monorail Yellow. To accommodate the increased capacity necessary to transport guests between Tomorrowland and the Disneyland Hotel, the number of cars per train was increased from three to four, which required the Tomorrowland station to be lengthened. The bubble dome on the top of each end car was larger than those of the Mark I cars, but otherwise, the trains were cosmetically very similar to their predecessors.

The Mark III trains were built by WED Enterprises and began operating in 1969. This fleet consisted of four trains, Monorail Red, Monorail Blue, Monorail Yellow, and the new Monorail Green. Each train was completely rebuilt to be more streamlined and efficient, and the rolling stock was increased to five cars per train. This increased the lengths of the trains to 137 feet, necessitating the lengthening of both stations. The lettering on the sides of the train still initially read "Disneyland-ALWEG Monorail System". These were the last trains to make reference to ALWEG.

The Mark V trains were built by Ride & Show Engineering of San Dimas and Messerschmitt-Bölkow-Blohm of Germany (the Mark IV designation was skipped at Disneyland because it was used at Walt Disney World instead). The trains in this fleet were phased in starting in 1987, as the Mark III trains had reached the end of their service life by then. The chassis of the Mark III trains were reused for the Mark Vs, but the trains were given an entirely new cosmetic design; rather than one solid color, the new trains were white with a colored stripe on the sides, closely resembling the Mark IV trains of the Walt Disney World Monorail System. During the creation of the Mark V fleet, Monorails Yellow and Green were recolored to orange and purple, respectively.

The Mark V trains had a capacity of 145 passengers per train, with 32 each in the two end cars and 27 each in the three middle cars.

The Mark VII trains were built by TPI Composites (as with Mark IV, the Mark VI designation was used at Walt Disney World and skipped at Disneyland). These trains are upgrades of the Mark V trains, having new body panels and seating arrangements, but still using the same Mark III chassis. Monorail Red was the first train to be upgraded, entering service on July 3, 2008, while Monorails Blue and Orange were phased in over the next nine months. Monorail Purple was not upgraded and was instead scrapped during the conversion. Cosmetically, the trains are somewhat of a hybrid between those of the Mark III and Mark V fleets, combining the nose cones and paint jobs of the former with the general body design of the latter.

Starting in 2012, the trains have occasionally been decorated with decals to celebrate events across the resort, such as the opening of Cars Land in 2012 or the Pixar Fest celebration in 2018. 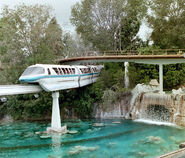