This article is about the theme park. For the resort, see Disneyland Paris.

Disneyland Paris is a theme park which is a part of Disneyland Paris. Owned by Euro Disney S.C.A., it is one of two theme parks in the complex just outside of Paris, in Marne-la-Vallée, France.

The park is based on a formula pioneered by Disneyland in California and further developed at the Magic Kingdom in Florida and Tokyo Disneyland in Japan. Occupying 566,560 m² (140 acres) it is the largest Disney park based on the original in California. The park opened as Euro Disneyland on April 12, 1992.

To all who come to this happy place, welcome. Once upon a time... A master storyteller, Walt Disney, inspired by Europe’s best loved tales, used his own special gifts to share them with the world. He envisioned a Magic Kingdom where these stories would come to life, and called it Disneyland. Now his dream returns to the lands that inspired it. Euro Disneyland is dedicated to the young, and the young at heart... with a hope that it will be a source of joy and inspiration for all the world. - Michael D. Eisner, April 12, 1992

As the fourth park to be based on the original in Anaheim, California, modifications were made to the concepts and designs of the park. Among these changes was a shift from Tomorrowland to "Discoveryland", giving the area a retro-futuristic theme rather than futuristic, which would be difficult to keep current. Other elements that were altered include the Haunted Mansion, which was redesigned as Phantom Manor, and Space Mountain. The park's location in Europe brought forth its own challenges. For instance, the castle is said by its designers to have been necessarily evaluated due to sharing a continent with real statues.

Modifications to the park were made to protect against changes in weather in the overcast Parisian climate. Covered walkways were added and Michael Eisner ordered the installation of 35 fireplaces in hotels and restaurants. “People walk around Disney World (sic) with humidity and temperatures in the 90s, and they walk into an air-conditioned ride and say, ‘This is the greatest,’ ” said Eisner. “When it’s raining and miserable, I hope they will walk into one of those lobbies with the fireplace going and say the same thing.”

The park, as well as its surrounding complex, initially failed to meet financial expectations. This resulted in an series of changes in which the word "Euro" was phased out of several names, before settling on its current name; Disneyland Paris in 1994. 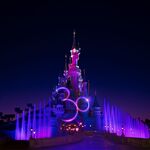