Disney Wiki
Register
Don't have an account?
Sign In
Advertisement
in: Sports teams, The Mighty Ducks, Character groups,
and 5 more

They are a team with no coach or structure and they have little equipment. When Gordon Bombay is arrested for drunk driving, he is sentenced to 500 hours of community service by coaching the ragtag team. When Bombay meets the team, he realizes the kids have no practice facility, equipment, or ability to go with it.

The team's first game with Bombay at the helm is against Bombay's old team: the Hawks. Reilly is still head coach and remains bitter about Gordon's shortcoming in that fateful game. District 5 gets pummeled and after Bombay berates the team for not listening to him, the players challenge his authority.

Bombay approaches his boss, Gerald Ducksworth, to sponsor the team, which Ducksworth reluctantly agrees. The result is a complete makeover for the team, both in look (as they can now buy professional equipment) and in skill (as Bombay has more time to teach the kids hockey fundamentals). Now playing as the "Ducks", they fight to a tie in the next game and recruit three new players: figure-skating siblings Tommy and Tammy Duncan and slap shot specialist and enforcer Fulton Reed. The potential of Ducks player Charlie Conway catches Bombay's eye and he takes him under his wing.

Bombay learns that star player for the Hawks, Adam Banks, actually resides in the Ducks' district boundaries and threatens Reilly into transferring Banks to the Ducks. Ducksworth makes a deal with Reilly about the Hawks keeping Banks, however, Bombay refuses since it would be against fair-play, which Ducksworth berated him about when he started his community service. Left with either the choice of letting his team down or get fired from his job, Bombay takes the latter.

Adam Banks proves to be a valuable asset. The Ducks manage to make it to the championship against the Hawks. Despite the Hawks' heavy attacks taking Banks out of the game, the Ducks manage to score a tie and earn a penalty shot in the final seconds of the game. Bombay encourages Charlie to take the shot, reassuring him that even if he fails it will be alright. Charlie manages to score a goal using a technique Gordon taught him. 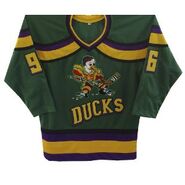 Jersey
Community content is available under CC-BY-SA unless otherwise noted.