"Hear that, Dizzy?"
"Sure did, Dee Dee!"
Dizzy & Dee Dee are a pair of Dalmatian puppies who appear in 101 Dalmatian Street.

Dizzy and Dee Dee are two cheeky pups who are always seen together. These two will follow Dolly anywhere... Even into trouble.

They are super sweet and always have the best intentions, but sometimes their good intentions get them into sticky situations.

Dolly gets the two to create a distraction; however, Dylan sets up a line of tripwire bells, in which the two quickly get tangled. This does provide a distraction for Dolly as she tries to grab the present while Dylan is disciplining them. In the morning, after Dolly and Dylan's battle causes Dorothy's present to get struck by lightning, they are relieved when they learn that Dorothy just wanted to play with the ribbon, which survived the lightning.

The two play a prominent role in "Dog's Best Friend" where the two, upon hearing Dylan lament about not having a human to help with the chores, decide to head out and get Dylan a pet.

The two search a coffee shop, where they eventually find a human and bring him home, giving them the name "Mister Fuzzy".

Despite Dylan's protests, Dizzy and Dee Dee show Mister Fuzzy to the other pups and appear to form the strongest connection to the human, quickly considering him part of the family, and showing concern if they may be injured.

The two happily watch with the other pups when Dolly and Dylan are able to pair Mister Fuzzy up with a vendor in the park.

In "Who The Dog Do You Think You Are?", the two are playing Martian Hunt (Hide & Seek) with Dylan in the attic, where they discover the portrait of the Prince of Dalmatia before heading to tell everyone about it. The two then playfully crown Dylan. Later, when Clarissa is manipulating Dylan, the two assist Dolly in getting into the lounge by bringing her in disguised as a present for Dylan. The two then get barred from the house with Dolly, commenting how bossy Clarissa is. They return to the house after Clarissa learns Dylan is not actually royalty.

In "Winter Funderland", they and the other puppies are disappointed when it rains instead of snowing. Dolly and Dawkins turn the house into a winter wonderland and invite friends over for a party. Dizzy and Dee Dee spend the majority of the party on top of an ice sculpture. After noticing the house getting too cold, they ask if they can come over to Clarissa's place, but she refuses. The two then watch with Dolly as the water erupts under Clarissa, with the Dalmatians celebrating their first snow and first Corgi Fondue!

In "Poetry Scam", Dizzy appears, questioning Dolly wanting to take credit for Dylan's poems, concerned about Dolly lying. She is also seen later at the poetry slam, glaring at Dolly before Dolly confesses that the poems are actually Dylan's. 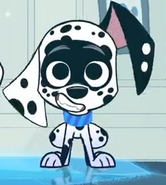 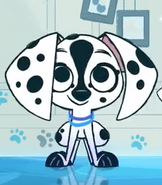 Dizzy and Dee Dee are usually seen together

Dee Dee and Dizzy in "My Fair Dolly"

Retrieved from "https://disney.fandom.com/wiki/Dizzy_%26_Dee_Dee?oldid=4334191"
Community content is available under CC-BY-SA unless otherwise noted.