Under The Sea: A Descendants Story

Employee at Lady Tremaine's Curl Up and Dye

Fashion, giving makeovers, showing off her talents, being acknowledged for her work, her friends, listening to music

Gets accepted as a Student at Auradon Prep, leaves the Isle of the Lost
Dizzy Tremaine is a character in the Disney Channel sequel Descendants 2. She is the daughter of Drizella Tremaine.

Dizzy debuts while doing her sweeping job at Lady Tremaine's Curl Up and Dye. She was listening to "Rather Be With You" when Mal came in and asked for a make over. Dizzy is excited to help as she didn't have a lot of chance to show her ability. Mal paid Dizzy for doing a good job, knowing she earned it, much to the young Tremaine's excitement. But her excitement is short-lived when Harry Hook arrives and demanded the money from Dizzy, which she reluctantly does, before Harry demands the rest of Dizzy's profits, which she's also forced to give him. As Harry exits the shop following his conversation with Mal, he knocks over some of the items on a nearby shelf onto the floor, much to Dizzy's dismay, as she has to do more sweeping.

At the end, Ben followed Evie's suggestion and sent a few guards to the Isle of the Lost to personally deliver the invitation to attend Auradon Prep to Dizzy. The girl screamed in excitement and hugged the guard. 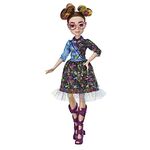 Retrieved from "https://disney.fandom.com/wiki/Dizzy_Tremaine?oldid=3676383"
Community content is available under CC-BY-SA unless otherwise noted.