Eating, Esmeralda, and the Gargoyles.

Hugo pestering her (formerly), people judging other people, heights, Frollo and his soldiers, Phoebus (formerly)
Djali is a supporting character in Disney's 1996 animated feature film, The Hunchback of Notre Dame and its sequel. He is the goat who is constantly assisting Esmeralda.

Belligerent and helpful, Djali is extremely loyal to his owner, Esmeralda. He is also marked by a tendency to be sassy and feisty, especially toward Esmeralda's enemies. (For instance, he blows a raspberry at Frollo when Esmeralda calls him (Frollo) a fool. Soon after, he headbutts Phoebus multiple times when he is ordered out of the cathedral he "confronted" the goat's owner in.) He appears to be faint-hearted.

Djali is Esmeralda's sidekick and helps her escape many times throughout the film. During the Festival of Fools, Quasimodo was being tortured by the crowd, which was started by Frollo's thugs, he and Esmeralda put it to a stop and freed Quasimodo, and an enraged Esmeralda calls for justice. After Esmeralda sings "God Help the Outcasts" she witnesses Quasimodo being scolded by the Parishioner who mistook him causing trouble on the Cathedral's nave, not realizing he was being tortured at the festival and then he and Esmeralda follow him and the Parishioner is scolded by the Archdeacon for scolding Quasimodo and attempting to stop the two. When they find Quasimodo in the bell tower Djali is then pestered by Hugo while Esmeralda apologizes to Quasimodo for what happened at the Festival and he shows them around the bell tower. Despite his low appearance, he is well-loved by fans. He seems to be shy as Esmeralda says he "does not take kindly to soldiers"[When talking to Phoebus in the church].

Djali reappears in the sequel and he is still being harassed by Hugo (the gargoyle one with the horns), who is in love with the goat. At the end of the film, during the festival of love, Hugo gives Djali a flower. Djali wholeheartedly eats the flower, and licks Hugo's cheek and flutters his eyelashes, implying that he has finally accepted Hugo. 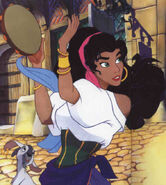 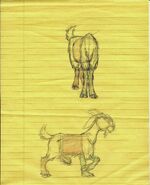 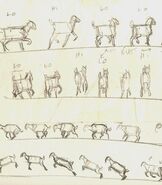 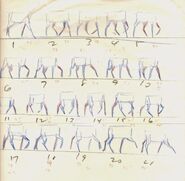 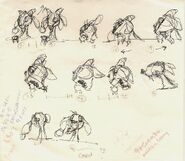 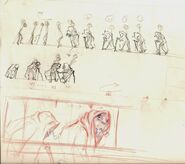 Retrieved from "https://disney.fandom.com/wiki/Djali?oldid=4452190"
Community content is available under CC-BY-SA unless otherwise noted.