Leader of the rat colony

“This is my dad. He's NEVER impressed. He also happens to be the leader of our clan.”
―Remy

Django is Remy and Emile's father and the leader of the rat colony. He is a major character in Disney/Pixar's 2007 animated feature film Ratatouille.

His son Remy is gifted with a keen understanding of cuisine, which Django really doesn't understand, as well as a powerful sense of smell and taste. Django notices his son's gift of a strong smell when Remy grabs a poisonous apple core away from him, in which he was going to eat. Because of this, Django gives his son the job of sniffing for rat poison. Django has split apart from his son Remy when their rat colony is discovered by the home's owner, forcing Django and the rats to flee into the sewer. Django is later reunited with Remy when Emile brings him back to the rat colony in their new home they moved into.

When Django hears that Remy has been close to humans, he is against it and gives Remy warning that humans and rats will never get along, showing his son an extermination shop with dead rats hanging on a bar, but Remy refuses to believe this. Later, Remy is captured by Skinner, in which Django and Emile help rescue him. Remy returns to the kitchen, where Linguini reveals the secret of Remy cooking by controlling his movements under his hat to the staff. Everyone is in disbelief and walks out of the kitchen, leaving Linguini helpless. Django finally sees his son's passion and determination to cook, and realizes that humans aren't that bad. As of this, he organizes the rest of the pack to help out in the kitchen. They lock Skinner and the Health Inspector into the storeroom when they try to interfere. Near the end, Django is sitting at mini tables located on a hedge of a window behind plants talking with other rats in his son's new restaurant, La Ratatouille.

"Food is fuel. You get picky about what you put in the tank, your engine is gonna die. Now shut up and eat your garbage." 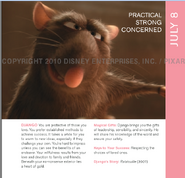