The Avengers: Earth's Mightiest Heroes
Ultimate Spider-Man
Hulk and the Agents of S.M.A.S.H.

Leonard Samson
Doctor Leonard "Doc" Samson is a psychiatrist who gets super-strength due to Gamma radiation.

At the Cube, a normal Samson visits Bruce Banner. During the breakout, the failures in the Cube cause Samson to get exposed to Gamma radiation, becoming super-strong and green-haired. Samson saves Banner from debris, but is attacked by Zzzax, which causes Banner to get angry and turn into Hulk, who fights his way out and takes Samson to safety.

Some time later, Samson accompanies the Avengers to investigate the Gamma dome surrounding the Cube. He and Thor end facing an augmented Wrecking Crew while Black Panther destroys the Gamma generator.

When the Leader activates a bigger Gamma dome in Las Vegas, Thor and Samson remain unaffected. Samson is beaten, but the Leader is defeated by Thor, Hulk, and Hawkeye.

Spider-Man imagines Doc Samson giving anger therapy to Wolverine and Sabretooth. The therapy fails as both mutants fight with Spidey trapped between them.

Samson tries to teach Skaar to behave, and when it doesn't work with therapy, Samson uses hypnosis. However, Skaar returns to his barbaric self when hearing the word "please". 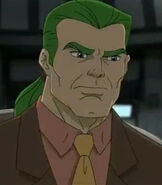 Doc Samson in Hulk and the Agents of S.M.A.S.H.

Retrieved from "https://disney.fandom.com/wiki/Doc_Samson?oldid=3807966"
Community content is available under CC-BY-SA unless otherwise noted.