Science, World Domination, His skills as a scientist being known

His skills being mocked, not taken seriously as a legitimate scientist, Spider-Man and every other superhero foiling his plans

Mental control of his metal tentacles
Doctor Octopus (real name Dr. Otto Octavius), or simply Doc Ock, is a fictional supervillain from Marvel Comics. A brilliant Oscorp scientist, Dr. Octavius was gravely injured in a lab accident. With the help of Norman Osborn, he survived his injuries, equipped with mechanical, tentacle-like arms on an apparatus to function and worked for Oscorp, to capture Spider-Man to use his powers for weapons. After several failures, he was fired from Oscorp and went into hiding underground. Doctor Octopus is one of Spider-Man's most prominent and dangerous enemies. He is one of the main antagonists of Ultimate Spider-Man, alongside the Green Goblin, Venom, Carnage, and Wolf-Spider.

A younger Doc Ock also appears as an antagonist and antihero in the subsequent Spider-Man cartoon, and for a time, swapped minds with Spider-Man to become the Superior Spider-Man.

Doctor Octopus was created by Stan Lee and Steve Ditko.

Doctor Octopus has a short height and is very pale, and also hunchbacked. Octopus has long black wet hair and wears red goggles. He wears a gray scientist suit, around his stomach he wears a mechanical device, which enables him to breathe, with four octopus arms attached to it.

Before the accident, Octavius claimed to have been handsome once as he saw his former face in the Hall of Mirrors.

When he was captured by Norman Osborn again, he was bald and his tentacles were removed has a new pair of goggles, which are silver in color with thin red lenses. Later on, his hair grew back and has his tentacles again, but still has his current goggles.

During the finale, he resembles his original look before the accident but had brown hair. He also wore red glasses and a yellow and green suit.

Doctor Octopus is a mad scientist that experiments with dangerous subjects, as shown when he created the symbiote. Although Doctor Octavius is always in his lab, after the first time chasing and capturing someone, he enjoyed and stated that he should have done it more often and that the thrill excites him. Octavius has shown to have no fear of getting in killed, shown to still chase after Spider-Man while water leaks into his lab. Although being insane, he feels the sadness after his accident, which caused him to change physically. Like a real octopus, Doctor Octopus is always hiding in the shadows, concealed in the cracks of his lab.

As twisted as he is, Doctor Octopus states that he has a form of honor, and always returns to repay favors to others who have helped him in the past. Understandably, however, he does not hold this code for those who double-cross him.

After the accident, Doctor Octopus had a trouble with breathing and a piece of technology equipped to him that enables him to breathe. If the holes are blocked Doctor Octopus can fall unconscious from the lack of air in his lungs. He is also unable to use his hands and legs, being very dependent of his bionic tentacles.

Doctor Octopus will appear in the MCU for the first time in Spider-Man: No Way Home.[1]

Doctor Octopus is ordered by Norman Osborn to capture Spider-Man, and to create equipment to sell, so Octopus hires the Frightful Four to do the job. After the Frightful Four were defeated, he is scolded by Osborn and decided to not fail again.

Doctor Octopus soon learns that Harry Osborn became Venom with the symbiote abd keeps it a secret from Norman. Despite the dangerous effects the symbiote had on Harry, Osborn is still impressed with the symbiote and demands Octavius to make more symbiotes like it. Octavius agrees but tells Osborn he would need more time. Osborn objects, explaining that time was something he did not have.

Later, Octavius is scolded by Norman for his failures, so Octavius states that he would capture Spider-Man himself. After Norman mockingly sends him off on this mission, Octavius destroys his screens in rage and goes after Spider-Man. He confronts Spider-Man at an amusement park and starts a fight against the spider. After they bring their battle into the hall of mirrors, Octavius sees a mirror reminding of his past self, but is interrupted by Spider-Man's remark, allowing him to grab Spider-Man and electrocutes him into unconsciousness. Octavius brings him into his underwater lab to dissect him. He reports to Norman that he caught Spider-Man. However, Norman still mocks him for his efforts, so Octavius decides that he would take are of Spider-Man on his own and cuts the communications off. Before Octavius can dissect Spider-Man, the latter wakes up and fights against Octavius. Norman witnesses Otto's failed attempts to hild Spider-Man down and fires him. In the process, the lab blows up causing water to leak in and reach up to Octavius and Spider-Man. Octavius drowns but is saved by Spider-Man at the last minute when he throws him out of the lab to float up to the surface.

Soon, Doctor Octopus returns in an armor similar to that of Iron Man's, with the addition of the mechanical arms. After a two-versus-one brawl, Octopus is defeated. Unbeknownst to the heroes, Octopus is captured by Norman once again and is rehired, Octopus now restrained and refined to a recuperation tank.

Soon, Doctor Octopus is placed in a green, spherical, and movable version of the recuperating tank and is given new goggles, with his tentacles removed and his head shaved. Doctor Octopus begins his work by sending the Frightful Four at Spider-Man again. However, this was a distraction to capture Spider-Nab with his Octobots and take him to his new lair. After revealing that Venom came from Spider-Man's DNA, Octavius becomes engulfed in his own monologue, providing Spider-Man with enough time to escape. They battle once again, but Norman Osborn then tases Spider-Man. Octopus then retreats to a new battlesuit of squid-like design, and injects Norman with an experimental green serum turning him into the Green Goblin. As Spider-Man's team arrives, Osborn is forced to confront them. He sets fire to his own lab during the scuffle and attaches a control collar on the Golbin so that he could control the Goblin; however, the Goblin is able to tear it off and in the process incapacitate Octopus's battlesuit. Octopus is then thrown around by the Goblin with his battlesuit continually being smashed by the Goblin's fists. It was here that the Goblin notices that the team had retreated, and goes after them, leaving Octopus for dead.

In "The Lizard", Octopus later resurfaces alive and well, as he tries to re-obtain his serums in one of his labs. Spider-Man and S.H.I.E.L.D. agent Curt Conners follow him and foil his plans, but Conners injects himself with one of the serums and transforms into the Lizard. The Lizard then hunts down Doctor Octopus to obtain more lizard DNA serum but Doctor Octopus refuses, noting that Lizard is losing his intelligence and becoming feral in the process. Lizard attacks him, forcing Spider-Man to briefly team up with Doctor Octopus to fight back. However, Doctor Octopus abandons Spider-Man in the middle of the fight.

In "The Sinister Six", Doc Ock recruits the Rhino, Electro, Kraven, and the Beetle to form the Sinister Six. He also abducts Connors and forcefully turns him into the Lizard, controlling with a device planted on the back of his neck to become a member of the Sinister Six. Spider-Man comes to Octopus' lab on Ryker's Island and is forced to fight the Sinister Six. The S.H.I.E.L.D. trainees soon arrive along with Iron Patriot and help defeat the Sinister Six, but Doctor Octopus uses this as the opportunity to inject Iron Patriot with Goblin serum and turns him back into Green Goblin. However, Goblin also lashes out on Doctor Octopus and departs with Spider-Man's captured teammates. Octopus also loses his control over the Lizard and his tentacles are incapacitated by Spider-Man. He is then locked away in S.H.I.E.L.D.'s new headquarters along with the remaining Sinister Six members.

Doctor Octopus appears in the subsequent 2017 cartoon Spider-Man, voiced by Scott Menville. In this, he is far younger, being a student-teacher at Horizon High, not that much older than Peter Parker, who he butts heads with. Growing up, Octavius had a hard life between being picked on by a jock named Steve and having problems with his own father Torbert. In Season 1, during a science fair hosted by Tony Stark, Octavius showcases his own innovative invention: a mechanical harness with robotic arms which would help complete more complex experiments. However, thanks to an attack by Crimson Dynamo attempting to rob them, the resulting disaster and Otto's failed attempt to stop her causes his harness to be fused to his body. Peter convinces Otto to make the best out of his situation and suggests he work together with Spider-Man, attempting to help him be a superhero. However, thanks to manipulation by Norman Osborn, Octavius becomes vengeful and villainous, turning the Osborn Commandos into the Sinister Six and christening himself as the supervillain Doctor Octopus. yet his plans are foiled by Spider-Man and Hobgoblin. In Season 2, Octavius' body falls into a coma and his consciousness ends up in cyberspace to remain alive before relocating himself into Spider-Man's body, adopting the Superior Spider-Man alias. Despite his original agenda, Octavius restores himself and Peter to their former selves after seeing the errors of his ways. Octavius dies by fading away into light particles after stopping the Goblin King using the Neuro Cortex leaving his tentacles behind. He is honored as a hero by the rest of the Spider Team, who attend his funeral along with Anna Maria and Max.

A close-up of Doc Ock in Ultimate Spider-Man 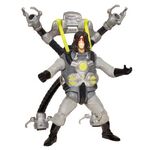 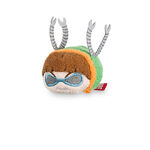 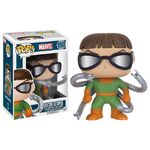 Retrieved from "https://disney.fandom.com/wiki/Doctor_Octopus?oldid=4436426"
Community content is available under CC-BY-SA unless otherwise noted.