Guardians of the Galaxy Vol. 2
Doctor Strange in the Multiverse of Madness

Doctor Strange is a Marvel Studios film based on the Marvel Comics character of the same name created by Stan Lee and Steve Dikto. It is the 14th film overall of the Marvel Cinematic Universe and the second of it's Phase Three. Directed by Scott Derrickson from a screenplay by him, Jon Spaights, and C. Robert Cargill, it follows the origin of neurosurgeon Stephen Strange and how a career-ending injury became the start of his new life as the Sorcerer Supreme. It was released on November 4, 2016.

Doctor Strange follows the story of neurosurgeon Doctor Stephen Strange who, after a horrific car accident that ruins his hands and thus his career, is made aware of the hidden world of magic and alternate dimensions and finds himself among the mystic protectors of Kamar-Taj, under the tutelage of the Ancient One, to trek the path of becoming the Sorcerer Supreme, facing down the threat of rogue sorcerer Kaecilius and the malevolent entity he serves, Dormammu.

Kaecilius leads his group of zealots in raiding the library of Kamar Taj, stealing a ceremony from the Book of Cagelisto. They are pursued by the Ancient One to London before being sucked into the Mirror Dimension. Despite her best efforts, the Ancient One loses them and fears the result of them stealing the spell.

Elsewhere in New York, neurosurgeon Dr. Stephen Strange enjoys his fame and greater challenges on the job. However, while driving through a winding valley road at night, he makes the mistake of checking a potential case over the phone. This results in him crashing and receiving terrible nerve damage to his hands. Now on unemployment, Strange sells his valuable watches to pay for experimental treatments. He hears of a man named Pangborn who was in a wheelchair until he received help. Pangborn tells him he learned to walk again with help at Kamar Taj.

Strange travels to find the location. He is greeted by Karl Mordo once he finds the secret doorway; he leads Strange through a portal to the real location. He meets the Ancient One who tells him with power training, Strange can harness magic to heal himself; though he has the potential to be a proper member of the Master of the Mystic Arts. The Ancient One sends Strange on a astral journey through the Multiverse to prove magic exists; though willing to learn, Strange is tossed out because the Ancient One senses his arrogance will block his path. Strange sits outside the door, until being let in after Mordo convinces the Ancient One that he is no different than everyone else who came for her help.

Elsewhere, Kaecilius and the zealots use the spell to contact Dormammu and are imbued with his powers. Their goal is to destroy the Sanctums blocking the Dark Dimension from entering the world.

At Kamar Taj, Strange finally breaks through his mental block and readily absorbs mystic knowledge. Using his astral form to bypass sleep and his photographic memory, Strange progresses rapidly. Finding the Eye of Agamotto, Strange learns of its ability to manipulate time; he uses it to find out the spell the zealots stole. However, he is scolded by Mordo and Wong for mishandling the Eye.

The Zealots destroy the London sanctum, forcing Strange to escape to the New York one when they invade Kamar Taj. Strange meets Kaecilius, who mistakes his name for "Mister Doctor" when Strange tries giving his title. The Zealots attack bim, with Strange using portals inside a magic door to toss zealots to random locations on Earth. The fight boils down to just Kaecilius, whom Strange tries to intimidate with a magic vase; however, he doesn't know how to use it. Strange is smashed into a display case, where he is chosen by the Cloak of Levitation; it leads him to a restraining armor that binds Kaecilius in place.

Strange removes the piece covering Kaecilius' mouth, whom says that he cannot stop what is happening. When the explanation sounds like gibberish, Strange threatens to gag him again. Irritated Kaecilus keeps calling him Mister Doctor, Strange clarifies his full title. Kaecilius then uses this knowledge to explain that his plan is to grant eternal life to the world by giving it over to the Dark Dimension to be ruled by Dormammu, who freely gives immortality. He then reveals the Ancient One has stayed alive by using the Dark Dimension's energy to suppress her aging.

Having been distracted by the conversation, Strange is wounded by a zealot. The cloak restrains the zealot while Strange opens a portal to a janitor closet at the hospital. Strange calls on his friend Christine Palmer to operate on him in order to stop the bleeding. At the same time the zealot astral projects to go after him. Strange enters astral form to use his energy to illuminate his wound for Christine while fighting the zealot. On Strange's order, Christine zaps his body with the defibrillator; the power surge is channeled out of Strange and into the zealot, killing him. Strange reveals his journey to Christine, who is shocked.

Returning to the sanctum, Strange finds Mordo and the Ancient One have rescued the survivors and that Kaecilius has escaped. They are surprised the cloak chose Strange, who is distraught to have killed; he broke his oath as a doctor. However, the Ancient One and Mordo push Strange too far by telling him to accept it and focus on stopping the zealots, who will allow Dormmamu to leech the life of their universe. Strange reveals the Ancient One leeches Dark Dimension energy to stay alive, shocking her and leaving Mordo in disbelief.

While the Ancient One leaves unwilling to deny or confirm the truth, Strange and Mordo are surprised by the return of the zealots. Strange pulls them into the Mirror Dimension, hoping to trap the zealots. However, the zealots have greater power in the Mirror Dimension, turning it into a dizzying kaleidoscope of landscapes. Kaecilius returns to lead the zealots in killing them, but they are stopped by the Ancient One; Mordo sees a mark of the Dark Dimension on her head briefly, confirming the truth. Kaecilius uses the fact no-one knows up from down in the now topsy-turvy world to open a portal that drops the Ancient One several stories to the ground. Strange and Mordo follow safely and take her to the hospital. However, the Ancient One astral projects during surgery; she knows she's done for and wants to see the snow one last time. Strange accepts her last bit of wisdom that using magic isn't about him.

Strange and Mordo head to the Hong Kong sanctum only to find it destroyed and the Dark Dimension bleeding in; the New York sanctum isn't enough to block the invasion alone. Strange uses the Eye to begin reversing time and revives Wong. Time continues flowing backwards as the Zealots show sign of being aware; using the Dark Dimension power, they subtract themselves from the Eye's effects. Though a zealot does get buried in a wall when it rebuilds.

Strange realizes there is no time in the Dark Dimension and freezes time on Earth; he flies into the Dark Dimension to meet Dormmamu. Setting up a magic rune with the Eye, Strange meets Dormmamu, telling him he has come to bargain. However, the entity only kills him after taunting Strange cannot win. To Dormmamu's shock, Strange returns and demands a bargain again; he simply kills Strange. Again Strange returns; confusing the entity. Strange explains he has trapped them in a time loop; since there's no time in the Dark Dimension, this moment is now eternal and Earth is safe. Dormmamu kills Strange endlessly to break the loop, only to be mocked by Strange's perseverance. At wits end, Dormmamu tells Strange he will accept the bargain to end their mutual torment; Strange's terms are simple: take the zealots and never return to Earth.

Strange returns to Earth a moment after he left, as Kaecilius notices he and the zealots are changing. Strange smugly explains it's the end of Dormmamu's deal with them, to become "part of the One". The zealots are pulled screaming into the Dark Dimension as they turn into Mindless Ones. Strange mocks Kaecilius for not stealing the whole book; the warnings come after the spells. Wong finally laughs at Strange's jokes. Mordo leaves the Masters of the Mystic Arts; unhappy that his idea they need to preserve order is not what saved the world.

Strange becomes the protector of the New York sanctum. Later, he visited by Thor, who is looking for Odin with Loki. Strange offers to help as long as they all leave afterwards; Loki is too much a threat to Earth.

Elsewhere Mordo attack Pangborn at his garage, stealing his magic and leaving him crippled again. The now-delusional Mordo has decided the problem with the world is that there are too many sorcerers; so now he is rectifying that mistake.

The Disney Wiki has a collection of images and media related to Doctor Strange (film). 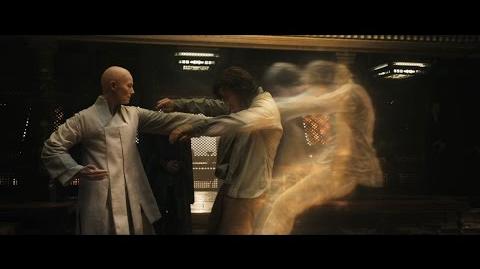 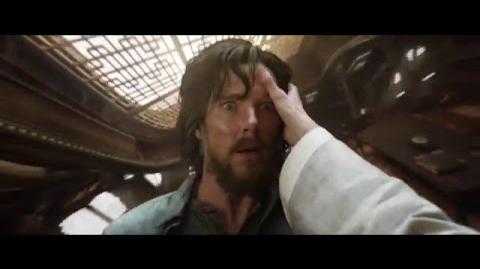 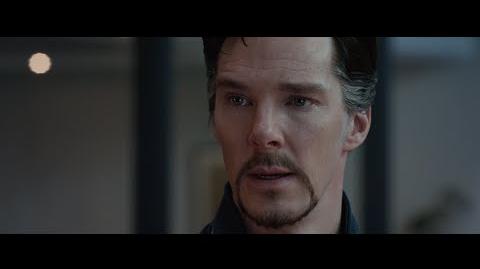 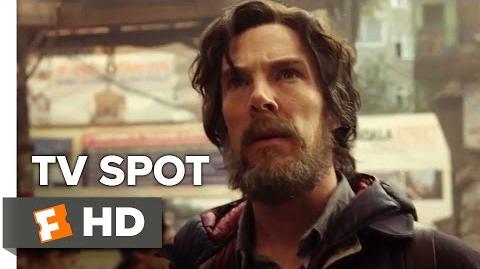 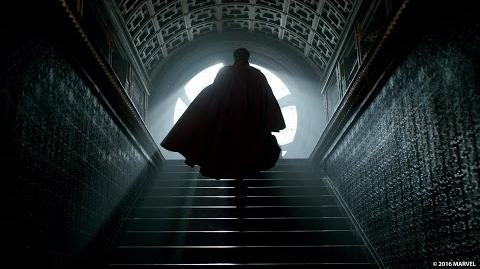 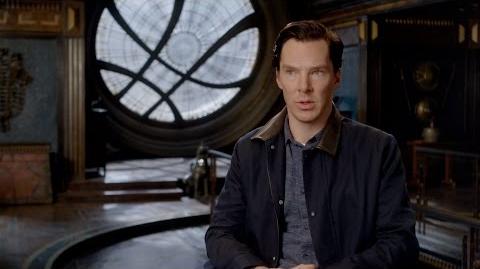 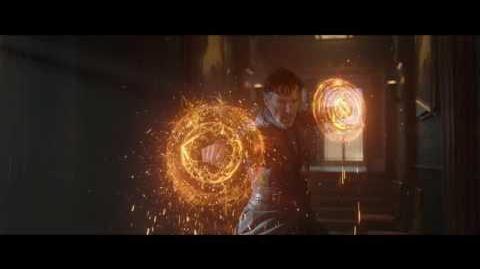 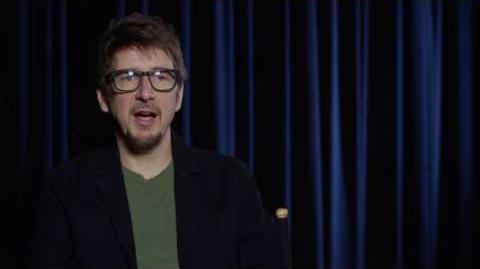 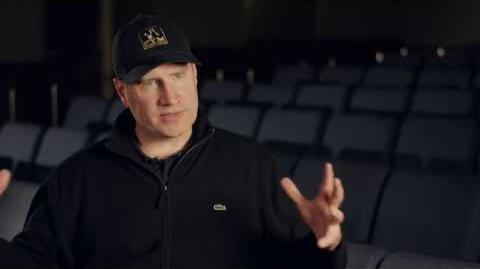 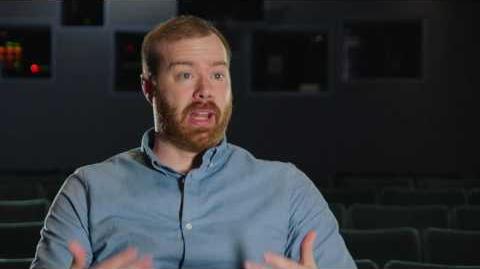 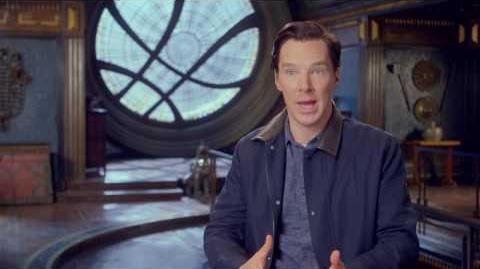 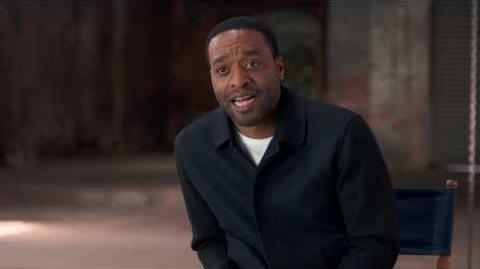 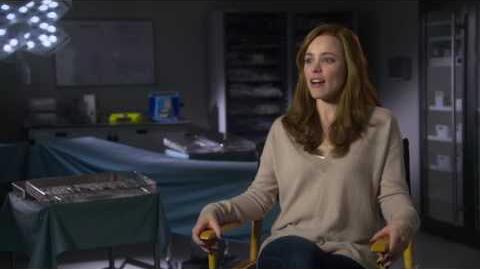 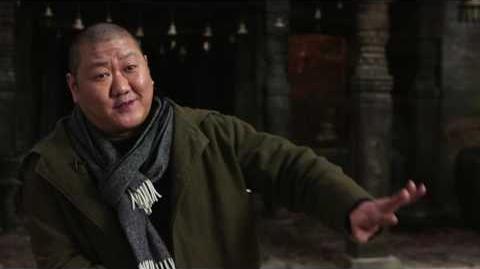 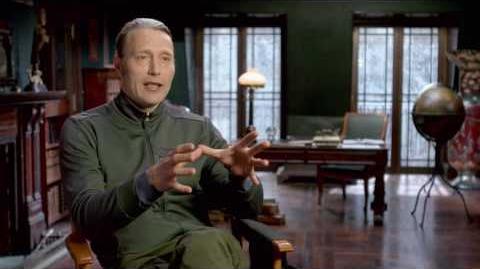 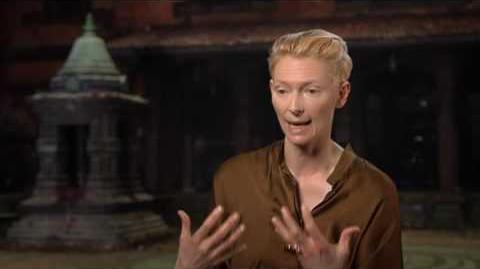 Doctor Strange "The Ancient One" Behind The Scenes Interview - Tilda Swinton