"Dog Gone" is the 20th episode of Season 1 of Kick Buttowski: Suburban Daredevil.

Kick is roped into watching Ms. Chicarelli's dog, Oskar, while she and Kick's mom go to play shuffleboard. Ms. Chicarelli makes it clear that if Kick doesn't take care of Oskar properly, she will see to it that he's grounded for life. Kick calls over Gunther to help, but they have a little trouble getting Oskar to eat his dinner and take a bath, especially when all he ever does is bite Kick's butt. However, once they take him for a walk, the real fun begins when Kick lets Oskar run freely, while he holds on to his leash on his skateboard. They end up going to the skate park and performing awesome tricks. Later, when they rest, Kick notices how much happier Oskar is when he's free, and decides to let him off his leash, despite Gunther's warnings. Oskar runs away immediately, and Kick and Gunther must track him down. They chase him through town until eventually, Oskar is captured and sent to the Mellowbrook Pound. Having a newfound respect for Oskar, Kick plans to sneak inside and rescue him. He sneaks in through the vents and makes it to Oskar's cage. He tempts Oskar to break through the cage by using his butt as bait. They make it back outside, only for Oskar to escape again. Ms. Chicarelli shows up at her house to find that Kick isn't there. Kick and Gunther approach the door, where Kick is ready to tell Ms. Chicarelli about Oskar, only for him to return. Kick says that he and Oskar are cool now, only for Oskar to bite his butt again. 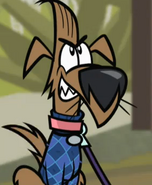 Retrieved from "https://disney.fandom.com/wiki/Dog_Gone?oldid=3758921"
Community content is available under CC-BY-SA unless otherwise noted.