Clarissa, being 2nd best, being told what to do all the time, being alone, her pranks backfired

Dolly is the female protagonist of the animated series 101 Dalmatian Street. She is one of the eldest of Doug and Delilah's puppies. She is very tomboyish and loves to come up with insane ideas. Her adventurous attitude contrasts with the pedantic personality of her stepbrother Dylan. Both she and Dylan look after their younger siblings while their parents are busy at work.

In some early concepts for Dolly, she was only going to wear one collar, with a tag, instead of the three she wears in the show. Some of this concept art also shows that her ears and paws were originally going to be black instead of white with spots, and that she would wear a beanie on her head.

Dolly comes from Doug's side of the family and is a confident and mischievous Dalmatian who enjoys messing about. While she does enjoy teasing Dylan, when times get serious, she will show that she does truly care for her family, such as apologizing in "Boom Night" (which Dylan treats as a big thing for her) as well as showing concern for Mister Fuzzy and comforting an emotional Dylan in "Dog's Best Friend".

Dolly is a rather athletic Dalmatian too, shown to often ride about on a skateboard, as well as a brief scene from the pilot showing her trying to bungee jump from Big Ben.

Dolly doesn't like when Delilah says that Dylan is a better child at something than her. It's possible that Delilah expressed her disappointment in Dolly not once, but a few times. In one instance, Dolly once got upset and angry at Delilah due to a misunderstanding to the point that she didn't want to spend time with her.

She and Delilah "never get to spend time together" according to Doug during one Mother's Day when they were on an adventure that wasn't planned, and come to know and understand each other more ("Girls' Day Out"). Dolly once said that she is very proud of her parents and understands they need to work to help humans.

In "My Fair Dolly", she wanted to prove her point to Clarissa ("Dalmatians can do anything") so badly that she accepted a dare from the dogs she doesn't like, and while doing so, Dolly got carried away, to the point where her brothers and sisters started to worry that she would become like a pet and wouldn't return back home. However, despite everything, Dolly didn't forget how much she loves her family and let the puppies give her a "good luck hug". When the puppies started to act like Dolly in her "Camilla" image and offended Dorothy, Dolly quickly threw that image off to return to her family. 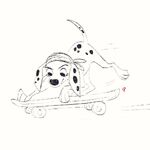 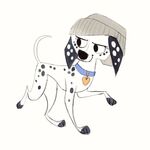 Dolly face to face with Dylan

Dolly and Dylan surrounded by their siblings

Dolly and Dylan blown away

Dolly and Fergus watch Dylan stand on a board

Dolly skateboarding in the opening

Dolly when she is around Hansel

Retrieved from "https://disney.fandom.com/wiki/Dolly_(101_Dalmatian_Street)?oldid=3932903"
Community content is available under CC-BY-SA unless otherwise noted.