Don't Have a Cow

That's So Raven
"Don't Have a Cow"

"Don't Have a Cow" is the second episode of the second season of That's So Raven.

Raven and Chelsea use an old spell book to get invited to a Halloween party, but accidentally turn themselves into cows in the process. Meanwhile, Cory and William go on a disastrous trick-or-treating trip.

At Bayside High, Eddie shows off his invitation to Alana's Halloween party to Raven and Chelsea, who were not invited due to Alana's bad history with Raven. The duo go to the Chill Grill after school, where they find out that Alana is hosting the party at the restaurant to spite Raven. As they eat their burgers, Chelsea panics when she realizes her and Raven's meals were accidentally switched and is ashamed of eating a hamburger as a vegetarian.

At Raven's house, the guilt-ridden Chelsea starts wearing a pin button with a cow's face on it. Raven suggests they look into her grandmother's chest of paranormal objects to pass the time, and they come across a magical book which contains a spell that can grant wishes. The two place all the necessary ingredients for the spell inside of a cauldron and wish to get invited to Alana's party. After casting it, Raven immediately receives a call from a hypnotized Alana confirming their invitation. Now knowing it works, they then wish to be the most popular girls at the party and have the best costumes. As they cast the spell, they fail to notice Chelsea's button fall into the cauldron in their excitement.

While preparing their costumes, they start panicking after noticing that their ears were shaped like a cow's and they had long, white tails on their rears. Shortly afterwards, Eddie arrives at the house to take them to the party. The two hide their bovine body parts from Eddie and force him out with the book as they start mooing sporadically. They find the button in the cauldron and realize that it altered their wish to turn them into cows. Raven suggests that they to go to Alana's party and get the book back from Eddie to reverse the spell before it's too late, figuring no one's going to question their appearances on Halloween.

At the party, Raven and Chelsea try to find Eddie as their bodies and mannerisms slowly become more cowlike. They develop snouts, hooves, and longer tongues as well as an appetite for straw and cud. After they locate Eddie, Chelsea ends up eating the book page they needed to reverse the spell. Alana's friends halt the party to announce the winners of the costume contest and are surprised to find Alana placed second. Alana angrily runs up to the stage and discovers that Raven and Chelsea won. At this point, the two have completely transformed into cows and decide to "milk it" as they sarcastically remark that they got their wish. It's then revealed that the whole night was a vision Raven had during their meal at the Chill Grill, allowing her to stop Chelsea from eating the burger and prevent the whole ordeal from ever happening.

In the side plot, Cory (who's dressed as a weightlifter) decides that he wants to trick or treat with his friend William (who's dressed as a remote), disappointing Victor (who's Dr. Frankenstein). Tanya (dressed as Igor) suggests that she and Victor go trick or treating on their own. Cory and William end up missing out due to Will's costume setting off alarms in the neighborhood while his parents get bagfuls of candy. Feeling guilty, Cory admits to Victor that he misses trick-or-treating with him, and the two and William go back out to get the candy that Cory and William missed out on (provided William doesn't touch his suit).

Chelsea's cow button that causes them to change 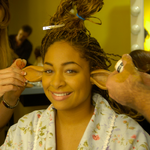 Both point at their snouts.

Raven struggles with her hooves

Raven loudly moos after the party is silenced.