He started his career at Walt Disney Productions in 1955, only to leave the company in 1979 and start his own animation studio, Don Bluth Entertainment (formerly Sullivan Bluth Studios) after believing the company had lost its charm when they turned down his pitch for an animated feature-length adaptation of Robert C. O'Brien's novel Mrs. Frisby and the Rats of NIMH, which he decided to create by himself and a few of his friends at the studio. It was shortened to The Secret of NIMH, and the protagonist was originally named Frisby, but the Wham-O Company was the then owner of the toy name Frisbee, so Bluth changed the protagonist's name to Mrs. Brisby. He found his greatest success teaming up with Steven Spielberg and creating An American Tail and The Land Before Time, which both shattered box office records for animated features at the time and challenged Disney, until the release of The Little Mermaid. After departing with Spielberg, Bluth worked on a few more films, All Dogs Go to Heaven being the last successful one, before Don Bluth Entertainment closed down at the release of The Pebble and the Penguin, at which he was hired at Fox Animation Studios. He found new success with Anastasia, but this company closed down at the release of Titan A.E., which was Bluth's last film to date. He is currently fundraising for a movie adaptation of Dragon's Lair.

He was also the older brother of Toby Bluth, who passed away in October 2013. 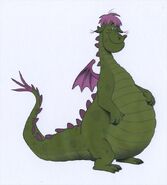 Widow Tweed
Add a photo to this gallery

Retrieved from "https://disney.fandom.com/wiki/Don_Bluth?oldid=3913852"
Community content is available under CC-BY-SA unless otherwise noted.