Don Donald is a 1937 American animated short film produced by Walt Disney Productions. It was the second short to star Donald Duck (although it was initially billed as a Mickey Mouse cartoon, despite the eponymous character not appearing at all). It introduces Donna Duck (the precursor to Daisy Duck) as Donald's girlfriend. Clarence Nash voices both since Donna's voice is the same as Donald's an octave higher. The short also notably features the first appearance of the car that would become 313, Donald's vehicle of transportation in the comics.

The cartoon takes place in Mexico and tells the story of Don Donald going to greet his girlfriend, Donna. Donald rides a donkey and lets Donna also ride it, but unfortunately Donna hates the animal. Angered at blowing his chances with Donna, Donald Duck gets angry at his donkey and calls it a mean name before seeing a flashy new red car on sale. With that, Donald trades in his burro for the new car. Donna loves the new car — until it breaks down in the middle of nowhere. She leaves Donald, who is left with nothing but a shrunken sombrero. The donkey, having returned on the scene, has the last laugh. 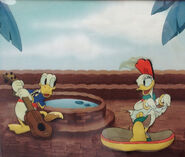 Donna gets mad and leaves. 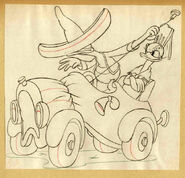 Reissue Title Card
Add a photo to this gallery

Retrieved from "https://disney.fandom.com/wiki/Don_Donald?oldid=3987394"
Community content is available under CC-BY-SA unless otherwise noted.