2
Donal Francis Logue is an Canadian-American actor, comedian, director, producer, and writer. He is probably best known for his role as Detective Harvey Bullock in the TV show, Gotham.

For Disney, he played Derick in Miami Rhapsody, Tommy Tom in The Torkelsons episode "Hot Ticket", Eugene Gurkin in the ABC TV show, The Knights of Prosperity, Artie Banks in Stumptown, and Earl in the 1997 Touchstone Pictures film, Metro. 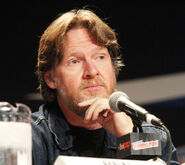 Donal Logue attending the 2014 New York Comic Con.
Add a photo to this gallery
Retrieved from "https://disney.fandom.com/wiki/Donal_Logue?oldid=4041155"
Community content is available under CC-BY-SA unless otherwise noted.