Donald's Boat (also known as The Miss Daisy) is a fishing boat owned by Donald Duck. Originally designed as a simple setpiece for Mickey's Birthdayland at the Magic Kingdom and developed further into an attraction for Mickey's Toontown at Disneyland, it eventually found its way into various Disney media. It is named after Daisy Duck, and even sports a figurehead in her likeness.

Check out Donald's sailor suit hanging out to dry on the laundry line and pull the ship's whistle to trigger water spouts on deck. Below decks, you can see Donald's favorite photos and seaworthy rain gear. With a rope ladder and the spiral staircase, you'll never want to be a landlubber ever again![1]

Donald's Boat possibly finds its roots in his debut cartoon, The Wise Little Hen. In that cartoon, Donald was shown to live in a houseboat.

According to earlier editions of Birnbaum's Disneyland Resort: The Official Guide, the boat at Mickey's Toontown is not actually Donald's house; rather, Donald keeps his boat docked in Toon Lake while his permanent residence is in Duckburg (the mention of Duckburg was dropped from later editions). Despite this statement, however, the design for the Miss Daisy boat was used for Donald's house in the television series Mickey Mouse Works and House of Mouse, bearing a striking resemblance to the Tokyo Disneyland incarnation. The computer game Mickey Saves the Day 3D Adventure shows the boat/house being close to a pond.

The Miss Daisy also appears in OsTown in the video game Epic Mickey, although the boat was sunk in a lake of thinner. It appears again in Epic Mickey 2 as a quest. It appears in Donald's Dock in the game Toontown Online and is actually driven by Donald. In the DuckTales/Darkwing Duck crossover comic "Dangerous Currency", the boat is seen as a model ship in a bottle sitting in Donald's living room.

The original Donald's Boat prop built for Mickey's Birthdayland in 1988. 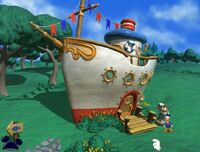 Donald's boat as it appears in Mickey Saves the Day 3D Adventure. 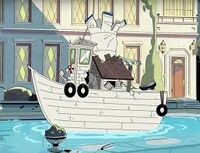