Donald's Quack Attack (also known as just Quack Attack) is a television series on the Disney Channel, which ran from November 2, 1992 to 2003, and later rerun on Toon Disney, made to replace Donald Duck Presents. It featured Disney animated short films, especially those with Mickey Mouse, Donald Duck, and Goofy. Each episode lasted about 22–28 minutes, leaving some time for commercials.

Unlike the similar Mickey's Mouse Tracks, Quack Attack was run with a manic energy. In between the cartoon shorts, a screen would appear with a random background color (pink, blue, green, etc.), with a clip in the corner from a random Donald Duck cartoon. There was a thermometer with Donald's head on the bottom, called the "Quack Attack Meter". When the clip showed Donald getting angry, injured, or humiliated, the head on the thermometer would go up and make a dinging sound. This 10-25 second clip would appear 2 to 4 times per show, depending on how long the shorts were.

The credits for the show didn't name anyone. Instead, it stated "The cartoons in this program are the work of animators from THE WALT DISNEY COMPANY over the past 60 years."

It wasn't possible to know what episode was going to be shown on any given day, but the show did feature showings of some shorts that don't show up on The Ink and Paint Club along with some shorts made by the Fleischer brothers, and clips from the animated features, such as Snow White and the Seven Dwarfs, Pinocchio, Peter Pan, and Lady and the Tramp.

Donald's Quack Attack aired on the Disney Channel from 1992 to 1998, and on Toon Disney from 1998 to 2003. From April 2001-Early 2003, Quack Attack usually aired weekdays at 5AM, and every night at midnight. Quack Attack's removal from Toon Disney notably marked the end of the classic Disney shorts being regularly shown on the network. The show later aired on Russia's version of The Disney Afternoon block in its 2006 season, but shows no signs of returning to American television.

Much like the similar Mickey Mouse Tracks, the show included the then-recently computer-colorized versions of the black-and-white Mickey Mouse cartoons which were done by American Film Technologies (under a deal with Disney) in 1990, and most of the cartoons were aired in the program with their original theatrical opening and closing titles intact, even though some of the shorts were still aired in this show with their opening and/or ending titles cut (presumably due to time constraints). 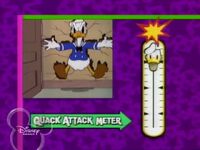 An example of the "Quack Attack Meter" in the intro, set to a clip from Donald's Nephews. 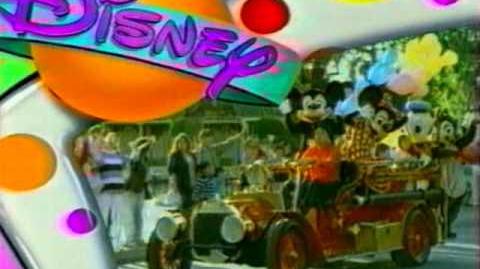 Дисней Клуб Кряк-Бригада (2006) Hi-Fi Sound
The intro as it appeared in Russia's Disney Afternoon block (translated to Disney Club in Russian) in 2006 along with the intro of the block.