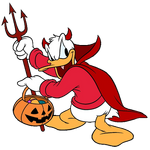 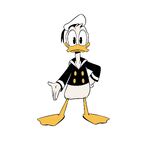 Earlier version of Donald's attire, with white stripes and hat and black bowtie 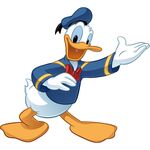 Donald with Humphrey the Bear

Poster for a showing of Disney cartoons in Sweden, especially Donald cartoons 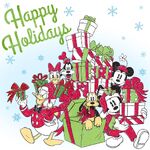 Promo ad for Mr. Duck Steps Out (as seen in Mickey Mouse Magazine)

Donald dances with José and the Aracuan Bird

Donald with Yaya (The Three Caballeros).

Donald Duck's evolution through the years, by Giorgio Cavazzano.

The evolution of Donald's design, by Marco Rota.

Donald earns his star on the Hollywood Walk of Fame

Donald in It's A Small World

Donald in the Disneyland's Christmas Parade

Donald rafting on Tom Sawyer's Island with a group of people

Donald as a ghost

Donald in The Twelve Days of Christmas

Donald with Tiffany Burton (from Kidsongs)

Donald with Shira Roth (from Kidsongs)

Donald with Michelle Montoya (from Kidsongs)

Donald in Let's Go to the Circus

Donald with Christian Buenaventura (from Kidsongs)

Donald with Tiffany Burton in Let's Go to the Circus

Donald in the audience

Donald on "Carols in the Domain"

Donald Duck and Goofy in the Full House episode "The House Meets the Mouse".

Dopey, Pinocchio, Alice, Donald, Minnie and the White Rabbit in the Full House episode "The House Meets the Mouse".

Donald, Jose, Panchito, Danny and Vickie in the Disney Main Street Parade in the Full House episode "The House Meets the Mouse".

Donald with Panchito & Jose in the Mickey Mouse Revue.

Mickey, Minnie, Donald, Daisy and Duffy in "My Friend Duffy" at Tokyo DisneySea

Donald getting smooched by Daisy in the Festival of Fantasy Parade. 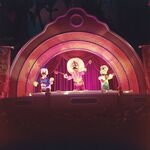 Donald with Ariel in Mickey's PhilharMagic

One of Donald's appearances in Mickey and Minnie's Runaway Railway, as a hot dog vendor

Another of Donald's appearances in Mickey and Minnie's Runaway Railway, as an irate truck driver (on the far left)
Add a photo to this gallery

A Donald balloon at the Party Gras Parade

Mickey, Donald, and Minnie balloons at the Party Gras parade

Mickey, Donald, and Goofy balloons at the Party Gras parade 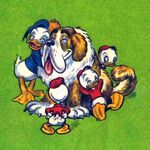 Donald, his nephews and Bolivar

A young Donald with Grandma Duck

Add a photo to this gallery
﻿
Retrieved from "https://disney.fandom.com/wiki/Donald_Duck/Gallery?oldid=4000210"
Community content is available under CC-BY-SA unless otherwise noted.