Like his friend Mickey Mouse, Donald Duck has starred in so many video games, the most prominent being the Kingdom Hearts series, that a whole page is needed to cover his appearances in them. 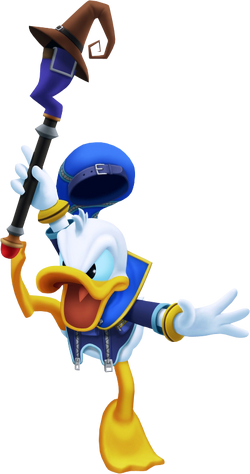 In Kingdom Hearts, Donald is the Royal Magician of Disney Castle and the royal assistant for King Mickey and one of the three main non-original Disney protagonist, alongside Mickey & Goofy. As such, his weapon of choice is a Staff. He often provides comic relief more than advancing the plot despite the amount of camera time he has in the series. He is rash and has an aggressive personality, but he is loyal to his friends.

Though he initially only cares about Sora as a means to track down King Mickey, Donald soon grows to deeply care for him as a friend.

Outside of Kingdom Hearts, Donald has starred in many video games of his own. Among the more notable ones:

The Duck Game was an unofficial Dutch game produced for the Commodore 64. It features Donald as he goes through levels doing various things such as picking apples and dropping bags of money on the Beagle Boys. Throughout the game, Donald must dodge The Beagle Boys and pterodactyls. Though it isn't an official game, it is worth a mention due to its one of the better (and apparently one of the only) Donald games for the Commodore 64.

Donald Duck's Playground was a game produced by Sierra Online and Walt Disney Productions in 1984 for the Commodore 64.

Released for the Sega Master System (and later ported to the Sega Game Gear) in 1991, Lucky Dime Caper is a platforming game starring Donald as he sets out on a quest to rescue his nephews and Scrooge McDuck's Number One Dime from Magica De Spell.

Deep Duck Trouble is a second platforming game released for the Sega Master System and Sega Game Gear in 1993. The game follows Donald as he attempts to reverse a curse that has inflated Scrooge McDuck like a balloon.

In QuackShot, which was released for the Sega Genesis in 1991, Donald is flipping through some books in Uncle Scrooge's library when a treasure map from King Garuzia, the old-time ruler of the Great Duck kingdom, falls out. It leads to the king's most prized possession. Donald thinks this is his path to riches. Unfortunately, Pete overhears and pursues Donald throughout the game hoping to steal the treasure.

Donald, using a partial map from the library, travels to a variety of places around the world seeking clues to find the treasure, including Duckburg and Mexico. After defeating Count Dracula in Transylvania, Donald receives a more complete map pointing to the Maharajah in India, Egypt, a haunted Viking ship, and finally the South Pole, where Donald finds an ancient Viking diary said to reveal the location of the treasure. However, upon finding the diary, Pete shows up, holding Donald's nephews hostage in exchange for the diary. After giving Pete the diary, Donald travels to Pete's hideout to defeat Pete and get the diary back. The diary reveals that if the map is dipped in water, it will reveal the location of the Great Duck Treasure.

After evading the traps, Donald eventually reaches the treasure vault, but it is guarded by an ancient guardian forcing Donald to fight. After defeating the guardian, Donald enters the treasure vault, only to find a simple stone statue. He is clearly disappointed, but Huey, Dewey and Louie accidentally break the statue, which reveals a golden jeweled necklace was hidden inside. Donald gives the necklace to Daisy and the two fly off into the sunset together.

The third game in Capcom's Magical Quest series (released only in Japan initially) has Donald join Mickey on an adventure to rescue Huey, Dewey and Louie from Pete.

In this video game, Donald plays the role of Maui Mallard, a "medium-boiled" detective visiting a tropical island when the mysterious Shabuhm Shabuhm idol goes missing. Shabuhm Shabuhm is considered the island's native guardian spirit, and unless the idol is recovered, the whole island will explode. Maui is put on the case, and his investigations lead him through a creepy mansion to a native village, where Maui is thrown into a volcano as a sacrifice to the native gods. Maui survives the volcano, and the islanders put him through the "test of duckhood", which Maui passes, gaining the natives' trust. The natives tell Maui that the only one who knows the location of Shabuhm Shabuhm has long since died, and Maui goes through the land of the dead to escort his soul into rest. Ultimately, the location of Shabuhm Shabuhm is revealed, and Maui goes head-to-head with an evil sorcerer over the idol. Maui is triumphant, and as a sign of their gratitude, the islanders name their island after their hero, despite their misgivings that the name "Mallard" has little potential for attracting tourists.

Donald Duck: Goin' Quackers!, a multiconsole game, follows Donald on an adventure to rescue Daisy when she is kidnapped by Merlock the Magician. 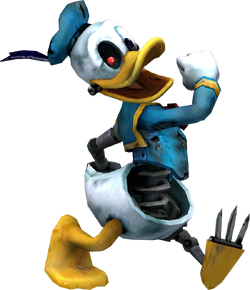 Donald himself does not actually appear in Epic Mickey (with the exception of some cartoon clips shown during the end credits), but the game does feature a robot version of him, built by the Mad Doctor as a friend of Oswald the Lucky Rabbit. Animatronic Donald Duck appears in "Bog Easy", Wasteland's counterpart to New Orleans Square at Disneyland. Like Goofy and Daisy, Donald's parts have been scattered in places inside the Lonesome Manor, and his quest requires Mickey to retrieve them.

Animatronic Donald reappears in Epic Mickey 2: The Power of Two, still living Bog Easy. This time, he needs Mickey's help fixing his boat so he can meet up with Animatronic Daisy for dinner.

Donald appears a meet-and-greet character in the game. He is first seen on Main Street, U.S.A. where the player must get an autograph from him to complete a task given by Mickey. Later on in the game, Donald can be found in Mickey's Toontown in front of his boat. In the game, Donald and Mickey are each running to become the next mayor of Toontown. Donald also gives a few tasks to the player. At one point, Donald finds what seems to be a treasure map. However, it is actually a map of Disneyland that belongs to Pluto which he uses to find the spots in which he buried his bones. Donald also gives the player a water squirter as a gift. Donald plans on dropping out of the election after accidentally dropping the apple pie he was planning to give to the voters to win votes. However, Mickey decides to help his friend by having the player give Donald one of Minnie's apple pies. Donald gratefully accepts and stays in the race.