With Askey:
Dade, Kayla, and Kobe
With Cobb:
Rocco and Wilder
Donald Adeosun Faison is an American actor, voice actor, and comedian. He is probably best known for his role as Dr. Chris Turk in the ABC comedy series Scrubs. He also starred as Phil Chase in the TV Land sitcom The Exes. Additionally, he voiced Wilson the boxer in the 2003 comedy Good Boy.

For Disney, he voiced Ricky Rotiffle in the Kim Possible episode "Homecoming Upset", Firefighter Hero in Higglytown Heroes, and Bartik in the Disney XD show, Tron: Uprising. He also played Petey Jones in Remember the Titans. He even voices Dragos the Dancer in the Disney Junior animated series Vampirina and Hype Fazon in Star Wars Resistance and plays Alex Evans in Emergence. 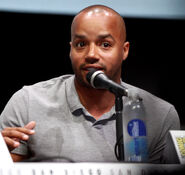 Donald Faison poses for a photo at the 2014 Sundance Film Fest.

Donald Faison speaks at the 2019 New York Comic Con.
Add a photo to this gallery
Retrieved from "https://disney.fandom.com/wiki/Donald_Faison?oldid=4110655"
Community content is available under CC-BY-SA unless otherwise noted.