Stephen (husband)
Geppetto (son)
Pinocchio (grandson)
Donna is a character on ABC's Once Upon a Time.

In the Enchanted Forest, Donna, along with her husband, Stephen, is tricked by Jiminy Cricket's parents about an elfin plague. They give them a fake serum as a cure. Unbeknownst to Jiminy, they switched the usual water serum they always use to scam people and give them the potion Rumplestiltskin had given Jiminy to get rid of his parents. After ingesting the potion, she and Stephen are turned into wooden puppets, which causes their son, Geppetto, much alarm and grief when he sees them.

After the casting of the curse, Donna and Stephen remain as puppets in Mr. Gold's pawnshop collection. 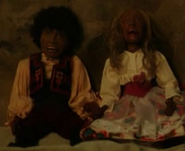