Jasmine, James, and Man Zeok
Donnie Yen (甄子丹) is a Chinese-American actor, who played Chirrut Îmwe in Rogue One and Commander Tung in the 2020 live-action adaptation of Mulan.

Regarding Yen's performance in Mulan, director Niki Caro stated that his prowess with a sword left her gobsmacked. She described that "One of my favourite moments on set was the first time I experienced Donnie Yen's martial arts skills in real life. As Commander Tung, he does a sword display in front of all the recruits and my jaw hit the floor."[1] 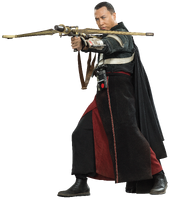