Donald Jr., Jeremy, Brandon, Christopher, and Joshua
Donald Clark "Donny" Osmond is an American singer, musician, actor, dancer, radio personality, and former teen idol, known for hosting, along with his younger sister, Marie Osmond, in the reality show, Donny and Marie, and hosted a talk show of the same name with her. He also hosted the 2002-2004 era of Pyramid. He is known for competing in the Fox show, The Masked Singer under the Peacock alias as well.

For Disney, his earliest association was in the 1970 episode of Wonderful World of Disney, Disneyland Showtime, alongside his brothers. Years later, he provided the singing voice of Li Shang in Mulan. In another Disney role, albeit on stage, he would play Gaston in the Beauty and the Beast musical on Broadway in the last few months of 2006 and returned to the part for the show's final Broadway performance on July 29, 2007. He also played the role of Doug in College Road Trip and himself in Hannah Montana.

Gaston
(Beauty and the Beast musical)

Donny Osmond behind the scenes of Mulan. 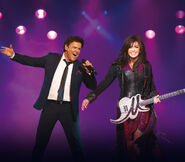 Donny with his sister, Marie at the Flamingo Las Vegas tour in May 2015.
Community content is available under CC-BY-SA unless otherwise noted.
Advertisement