Flees in terror after being frightened away by the Puffball's mother.
The Doom Dragon is a creature in the show Wander Over Yonder. It is seen in "The Egg" and is voiced by Fred Tatasciore.

Black with red, orange, and yellow horns and wings. 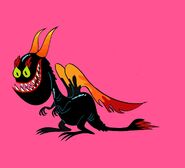 Retrieved from "https://disney.fandom.com/wiki/Doom_Dragon?oldid=4087900"
Community content is available under CC-BY-SA unless otherwise noted.