To destroy the world at the stroke of midnight

The Doomsday Clock is a device created by the vengeful wizard Zorlock, featured in the Adventures of the Gummi Bears episode "A Knight to Remember".

Crafted ages ago, the clock was meant to destroy the world at the stroke of midnight. Sir Gallent once went on a quest to find and dismantle the clock, but unfortunately passed away before he could do so.

Years later, Gallent's ghost took Cubbi Gummi on a quest to finish what he couldn't.

Using a magical Gummi compass, the two discover the Doomsday Clock hidden away in an underground treasury. Gallent gives Cubbi a wrench to dismantle the clock's golden gears.

The hermit troll who lives in the vault is convinced that Cubbi is after the treasure. In a tussle with the troll, Cubbi accidentally knocks over a treasure chest, which hits the clock's pendulum, setting it in motion.

While Gallent deals with the troll, Cubbi enters the clock to find the golden gears.

After climbing the internal mechanisms, Cubbi finds the golden gears at the very top. As he prepares to unscrew the golden gears, a temprarilly fixed tear in his shirt comes undone and gets caught in the grinding cogs behind him, causing him to drop the wrench.

Suddenly getting an idea, Cubbi removes the sewing needle from the torn part of his shirt and sticks it between two of the golden gears. With this part of the mechanism jammed, the rest of the clock's inner mechanisms start coming apart.

Cubbi manages to escape before the Doomsday Clock explodes, scattering parts all around. 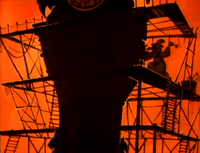 Zorlock constructing the Doomsday Clock in a flashback 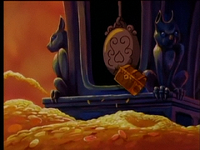 The clock's pendulum is set in motion 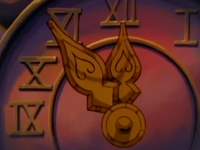 The clock starts counting down to doomsday 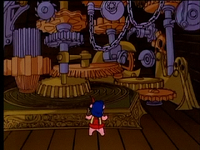 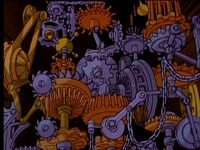 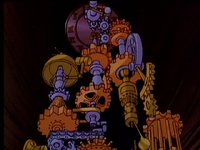 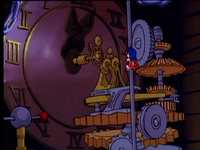 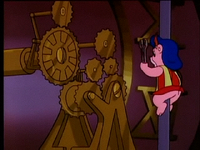 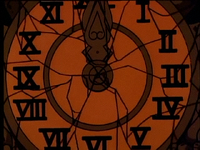 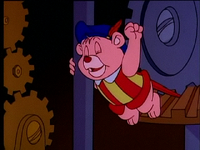 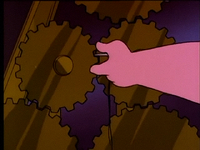 Cubbi shoves a sewing needle between the golden gears 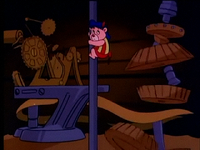 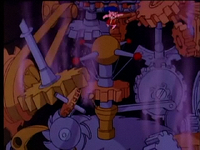 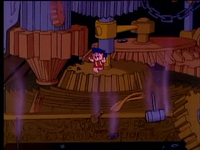 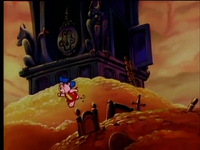 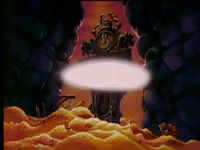 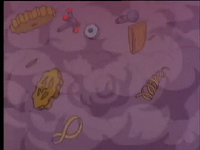 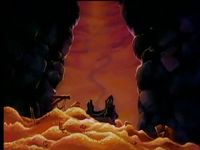 The remains of the clock

Retrieved from "https://disney.fandom.com/wiki/Doomsday_Clock?oldid=4473231"
Community content is available under CC-BY-SA unless otherwise noted.