Jelly on his nose, tea, living in the teapot

"Twinkle Twinkle Little Bat!"
The Doormouse is a character and a friend of the Mad Hatter and the March Hare in Disney's 1951 film Alice in Wonderland. He is voiced by both Jim MacDonald and currently Frank Welker.

After the Cheshire cat tells Alice to visit the Mad Hatter Alice visits him during his Unbirthday party.When Alice sits down the Mad Hatter and March Hare exclaim there is no room.Then the March Hare says how rude it is to sit at a table without being invited the Doormouse sleepy eyed pops his head out of a yellow teapot backs him up by saying "Very very very rude indeed".Next he is shown when Alice's unbirthday cake explodes.He is flying with an umbrella singing Tinkle Twinkle Little Bat.As he floats down to the table the Mad Hatter puts his teapot under him and closes the lid.When the Mad Hatter and March Hare ask Alice to explain her adventure Alice says she was sitting by the riverbank with Dinah her cat.Then the Dormouse goes on a crazed frenzy saying "Cat cat cat cat cat" everyone helps to apply jam to his nose amd he goes back to sleep.He is last seen at Alice's trial in his yellow teapot.Before the Queen of Hearts asks him to give her information in her loud tone of voice the King of Hearts and Card Soldiers warn her to speak quietly.When he is asked he sings "Twinkle Twinkle Little Bat" which the Queen of Hearts states is very important information.When Alice says she sees the Cheshire Cat on the Queen of Hearts'crown he goes in his crazed frenzy yelling "Cat cat cat cat cat" it is even harder to apply jam to his nose as the Queen of Hearts gets hit on the head and jam splattered in her face. He isn't shown in the final chase scene.

The Doormouse appears in cameos popping out of a teapot that is on a table surrounded by Alice in Wonderland characters.

The doormouse has two Vinylmations.One shows him popping his head out of his yellow teapot and the other shows him in outside his teapot.He also has a stuffed animal. 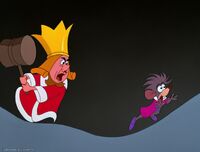 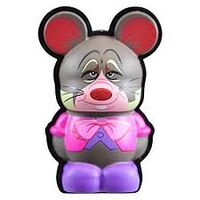 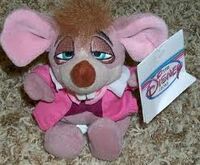 Doormouse Vinylmation2
Add a photo to this gallery

Retrieved from "https://disney.fandom.com/wiki/Dormouse?oldid=504839"
Community content is available under CC-BY-SA unless otherwise noted.