“I heard this story about a fish. He swims up to this older fish and says, 'I’m trying to find this thing they call the ocean.' 'The ocean?' says the older fish, 'that’s what you’re in right now.' 'This?' says the young fish, 'this is water. What I want is the ocean.'”
―Dorothea Williams to Joe Gardner[src]

Dorothea Williams is a supporting character in Disney•Pixar's 2020 animated feature film, Soul. She is the leader of her band, The Dorothea Williams Quartet, and has a skilled performance with the saxophone. Dorothea helps Joe pursue his dream, which is to play with her once before his passing, and gives him a chance to perform with her at the Half Note Club. Skeptical of him, Dorothea initially believes Joe does not have what it takes to perform because of his current profession, but is proven wrong several times, and accepts Joe is more than a middle school music teacher, but also a passionate pianist.

Dorothea Williams is a famous jazz musician who plays the saxophone and loves jazz as much as her own performances. She had become in close relations with Curley and began to perform at the Half Note Club almost every night. She is also admired by Joe Gardner, who plans on presenting himself to play with Dorothea and her band The Dorothea Williams Quartet at the Half Note Club.[1]

“Dorothea Williams is a world-renowned jazz legend who’s earned her place among the greats. Confident, strong and poised, she is also truly talented when it comes to her saxophone playing. Dorothea exudes pure confidence on stage and suffers no fools when it comes to jazz or life. Her band is her family, and joining that family is an honor she’s willing to extend to very few. It’s not easy to impress Dorothea, but it’s worth trying.”[2]

Dorothea is a talented jazz musician who can be skeptical of certain people, including Joe Gardner. Although it appears first impressions take a role in how she views people, Dorothea knows talent when she sees it and will help her friends out if they need it. It also appears as if Dorothea takes music very seriously and can be seen as picky when selecting people to perform with her on stage. During small talk, and although she means good, Dorothea can come off as sarcastic and unpleasant during first impressions, but when someone gets to know her, she won’t let them down.

Dorothea is also wise and knows when people think they don’t fit in their place and is willing to give them advice when need be. She also helps Joe Gardner by telling him a short story, which eventually would lead him to find his place.

Dorothea appears to be a middle-aged African American woman with brown and curly hair that she is always holding up with a headband. Dorothea also wears red lipstick and is usually seen wearing classical-like clothes that make her appear like a professional musician. Dorothea also appears to be a little wide and wears golden hoop earrings on both of her ears. Dorothea is also usually seen carrying around her saxophone wherever she goes, especially during performances and while attending the Half Note Club.

Dorothea is recognized as one of the more talented jazz musicians in New York City and is most profound with the saxophone. During most of her stage performances, Dorothea is using her instrument and nothing more. Because of her popularity and talents with the saxophone — and jazz — she has attracted the attention of Joe Gardner, who dreams of performing beside her.

Dorothea Williams makes her first physical appearance in Soul. After wishing Joe could play with Dorothea Williams, Curley reveals she is actually holding open auditions for a piano player at the Half Note Club. Excited, Joe runs right over to Half Note Club and introduces himself to Dorothea. Initially, she begins to have second thoughts, knowing that Joe is just a music teacher at a school. However, after hearing him play the piano during practice and getting carried away, Dorothea sees his potential and gives him the job right away.

When Joe falls down the manhole and comes face-to-face with The Great Beyond, he panics instantly knowing that he is passing on one of the biggest days of his life, and that his dream to play with Dorothea Williams might not come true.

When Joe returns to Earth in the body of a cat and 22 taking his body, they escape the hospital as quickly as possible, and attempt to rush back to Joe’s apartment so that they can get ready. However, while trying to hop into a taxi, Dorothea Williams comes out of the taxi and sees Joe in a hospital gown covered in grease and food leftovers. Dorothea, not knowing of 22 and Joe’s situation, believes Joe to be crazy and fires him. Joe believes his dream is ruined, but Curley calls Joe and tells him (in a voice message) that Dorothea might give him a second chance if he comes early and looks more professional.

When Joe arrives back inside his own body and abandons 22, he leans to the Half Note Club and is confronted by Curley, who tells him not to disturb Dorothea, but does so anyway. He bursts into her dressing room and confronts Dorothea, and ultimately convinces her to let him perform with her tonight. Dorothea then lets Joe perform with her and soon realizes he’s good and that their performance was a hit.

Later, Joe and Dorothea leave the Half Note Club. Outside, Joe asks when they get to do it again, and Dorothea replies by telling him they’ll perform tomorrow and hints they will perform almost every night. Disappointed, Dorothea notices Joe doesn’t like that idea and lets him know that performing might not be for him. Before taking the taxi and leaving, Dorothea gives Joe some final words by telling him a story about a fish who lived in the water who wanted the ocean, knowing it lived in the ocean. Dorothea then leaves Joe and takes the taxi.

“Soul of the City”

Dorothea Williams appears as a silent character in Pixar Popcorn, and first appears in the episode “Soul of the City,” where she is seen resting her saxophone in the Half Note Club.

In Onward, a Dorothea Williams record appeared during the scene where Colt Bronco visits the Lightfoot House at the beginning of the film.

At first, Dorothea dislikes the fact that Joe is a middle school teacher but becomes aware of his talents and passion for jazz after his audition at the Half Note Club. Because of his potential, she gives Joe a chance to perform with her later that evening.

Later, when Joe is unsure if he wants to continue his journey with Dorothea after completing a successful performance at the club, she tells him a fictional but significant story, which helps to lead him in the right direction and his future decisions.

Curley becomes a part of Dorothea’s jazz quartet sometime after being in Joe’s middle school class. Curley has been a member and seems to advise Dorothea when needed. 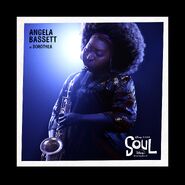 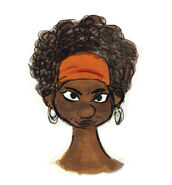 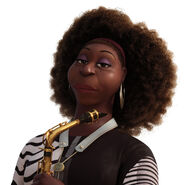 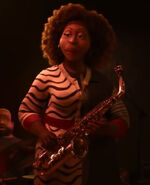 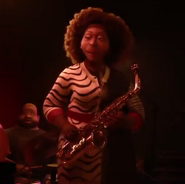