March 11, 2017
"Double Agent Droid" is the fifty-sixth episode of the Disney XD animated series, Star Wars Rebels. It premiered on March 11, 2017, and is the nineteenth episode in the third season.

Flying in a stolen Imperial shuttle, piloted by Wedge, Chopper, and AP-5 are on a mission to an Imperial Security Bureau installation to steal codes for the upcoming attack on the Lothal Imperial Factory. They arrive at Killun Station on Killun-71. They are escorted in by two TIE Fighters, and soon after landing Chopper and AP-5 enter the building after they pass through the security scanner. AP-5 is clear, but Chopper unknowingly is not. Chopper's unclear passing through the scanner triggers an alarm that alerts an Imperial Information Officer known as the Controller. Under Grand Admiral Thrawn's orders, he has been tasked in finding the spy droid that has been infiltrating their facilities. They arrive at Killun-71 and find footage of AP-5 and Chopper arriving at the station. The Controller immediately identifies Chopper as the Rebel spy droid. He decides not to alert the station, because he wants to extract the location of the Rebel's base from Chopper.

Back on Killun-71, the two droids, after another disagreement, decide to split up and seek the codes from different sources. AP-5 succeeds in recovering the codes from the central computer while Chopper chose to access them from a basic terminal. Suddenly, the Controller hacks into Chopper while he is accessing the terminal, only to find that the droid has no coordinates to Chopper Base. So he decides to seize control over Chopper and use him to lead them to the Rebel base. Chopper tries hard to resist reprogramming, but it is futile. Chopper is now under Imperial control. Just then, AP-5 shows up with the clearance codes downloaded onto a disc, unaware of what has just happened to Chopper. They return to the shuttle, and depart from the station. As they head back, both Wedge and AP-5 notice a sudden change in Chopper. He is acting more polite and well mannered than he usually is. He even offers Wedge refreshments. This leaves AP-5 suspicious, and suspects that Chopper may have been compromised during the mission. Wedge on the other hand does not suspect anything, and does not take the Inventory droid seriously.

They rendezvous with the Ghost, and AP-5 presents the clearance codes to Hera. He tries to explain his concerns about Chopper, but still nobody takes him seriously. However, Hera begins to suspect something is not right with Chopper after she catches him accessing the hyperspace logs. He claims that he is just updating his database, but Hera's suspicions say otherwise. She shares her concerns with the others. However, Chopper overhears them, talking about his change of personality and recommending that they give a diagnostic. Suddenly, Chopper seizes control of the ship and traps Hera, Wedge, Ezra, Zeb, and AP-5 in the cargo haul. Chopper then recovers the stolen data for the Controller, and then he has the droid install a data spike into the Ghost's nav-computer so they can download the location of the Rebel base. Then the Controller commands Chopper to dispose the Rebels out the main hatch. The Rebels struggle to hold as the vacuum of space tries to pull them out until Hera manages to seal the hatch. Afterwards, they find out what is wrong with Chopper and what he is up to. With a quick plan, the Rebels send AP-5 outside so he can override the hatch controls on a access port located outside the ship. When Chopper spots him, the Controller orders him to stop him. Armed with blasters, Chopper forces AP-5 off the ship just as he succeeds in accessing the overwrite circuits. After sending AP-5 adrift in space, Chopper returns to the Ghost. He is taken out by Zeb, and the data spike is removed. Angry with the Imperials messing with her droid, Hera uses the Controller's connection with Chopper against him, by sending a power surge that destroys his ship and with it himself.

With the Controller's connection gone, Chopper returns to his old grumpy self. Meanwhile, AP-5 remains adrift in space, and he strangely starts to enjoy it. He loves the peaceful solitude. But then his happiness is ruined when the Ghost comes in and scoops him up. 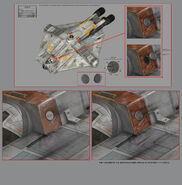