Wonder Woof (by himself)

Dylan (stepson)
Dolly (daughter)
Dalmatian Puppies (children, adopted children and stepchildren)
Doug is a character from 101 Dalmatian Street. He is an American Dalmatian who moved to London to become a firefighter dog. It is there he met and married Delilah, a descendant of Pongo and Perdita. The two also have a large litter of puppies from previous marriages which, when combined together, make a total of 99.

In some early concepts, Doug was planned to have an appearance almost identical to Pongo, with black ears and a red collar. Whether or not he was originally planned to be Pongo before being altered is not known at this time.

Doug is a regular in the series; while he works all day as a fire dog, his eldest pups, stepson Dylan and daughter Dolly, watch over their miscellaneous younger siblings.

In the episode "Dog's Best Friend", Doug returns home from the night shift before he gets glomped by the puppies. He tries to get some sleep but is woken from the sound of a human, which Dee-Dee and Dizzy adopted for Dylan. He tries to tell Dylan what a big responsibility a human is, but gets trampled when he mentions the park. Later, when the food machine is out of control, Doug tries to keep the situation calm but gets covered by bowls and kibble. Doug then advises Dylan on what to do about the human they have adopted.

In "Boom Night", Doug helps fit earmuffs onto the other pups during the titular event to protect the children from the disruptive sounds before he and Delilah head to their respective jobs. Doug is more anxious than Delilah about the night, vocally questioning why the humans do it every year. Before he heads to work, Doug gets tearful and calls for a group hug from all the pups. He is later seen in a fire truck, howling in rhythm to the siren, where he almost notices Dolly and Dylan outside.

In "Snow Day", Doug is off work with London being closed due to snow. As such, he decides to prep his kids for a family outing in the park when they ask to go. He first tries to get the pups into warm winter wear by being "The Hat Reindeer", placing wool hats on the heads of his children one at a time. He and Delilah agree to a contest against Dylan and Dolly to see who gets the pups prepared the fastest.

In "A Summer to Remember", Doug and Delilah start the family vacation off dealing with their children constantly asking if they are in Cornwall yet until they arrive. Upon getting to the beach, he and Delilah try to have some romantic alone time, only for the pups to interrupt them.

In "Fetch", Delilah & Doug are celebrating their anniversary. According to Doug, the two had their first drink together by the pond in the park. 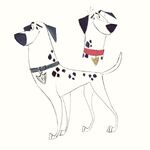 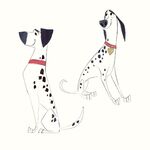 Doug As He Appears In The Pilot Animation Reel.

"AW-WOO-WOO-WOO!" Doug imitates the sound of his fire engine by howling

Doug goes through the family heirlooms to find the vial containing Cruella's hair.