Student and Member of the marching band at Auradon Prep

Getting an A-, Chad Charming manipulating Evie, the thought of losing Evie

Evie (girlfriend)
Doug a character in the movie Descendants, played by Zachary Gibson. He is the son of Dopey. Doug currently works as the accountant for Evie's 4 Hearts.

Doug is an intelligent individual. Typical for someone who's an intellectual, Doug is very calm and does not express his emotions very well. Even when he had a crush on Evie, he did not stutter with nervousness as most people do. After they started dating when he held Evie's hand when discussing her plans to buy a castle, he did not show any signs of emotions or even smile, even though his love for Evie was evident. The only time he expressed emotions was when he thought Evie was seeing someone else and was afraid of losing her.

Stemming from his intellect, he is quick to spot inconsistencies. When Jay and Carlos made up the cover story Evie went camping, he was skeptical at first, knowing Evie isn’t the outdoors-type.

He is part of Auradon Prep's marching band and is a talented musician who ironically takes a liking to The Evil Queen’s daughter, Evie. He ends up stalking her on her first day, coming to find she is a kindred spirit when it comes to the mind. He remains determined to win her heart, even helping her keep from being expelled when Chad handed their chemistry teacher the magic mirror to prevent her from cheating. After she gets a B+ on her wits alone, they begin bonding. Then after the coronation, they share a couple's dance.

Six months after Evie's moving to Auradon, he started helping her with her gown orders. He was later looking for Evie, now knowing she sneaked off to the Isle but ran into Jay and Carlos who lied and said she went camping. Being skeptical of this because he knew Evie is not the outdoor type, he started to get paranoid and thought she was seeing someone else. After confronting her and learning Evie was not seeing anyone, he calmed down and went with her to the royal cotillion. 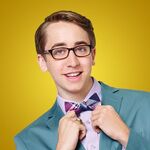 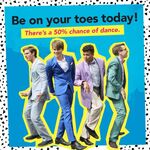 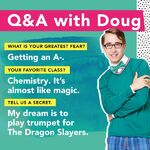