1990-present
Douglas Bourne, better known as Doug E. Doug, is an American actor, comedian, screenwriter, producer, and film director. He started his career at age 17 as a stand-up comedian. He is best known for his roles as Griffin Vesey on the CBS sitcom Cosby, Sanka Coffie in the film, Cool Runnings, and as the voice of Bernie in the DreamWorks animated film, Shark Tale.

His other Disney roles so far include Sp4 Harvey (H.A.) Ashford in Operation Dumbo Drop, and Agent Zeke Kelso in the remake of That Darn Cat. 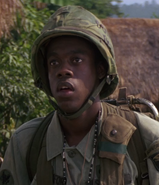 Zeke Kelso
(That Darn Cat)
Add a photo to this gallery

Add a photo to this gallery
Retrieved from "https://disney.fandom.com/wiki/Doug_E._Doug?oldid=3922441"
Community content is available under CC-BY-SA unless otherwise noted.