A character that creator Jim Jinkins created in the 8th grade

Drawing, playing the banjo, the Beets (favorite band), Patti, hanging out with his friends, Porkchop, the color green.

Guy trying to take Patti away from him, Roger being a jerk, band class, people being better than him, being bullied, his middle name "Yancey"

Porkchop (dog)
Happy (hamster) †
Goldy †
Douglas Yancey "Doug" Funnie[3] is the titular protagonist of the Nickelodeon/Disney television series of the same name. He was 11 years old in the Nickelodeon series and 12 in the Disney series.

He was originally voiced by Billy West, who reprised his role for bumpers and commercials.

Doug is an extremely short-tempered, easily angered, and imaginative young boy who is often the target of being easily provoked or having a practical joke played on him. He is known for having strong moral values and always knows to do the right thing. He also is famous for his wild imagination, and often has various fantasy sequences in the series.

Doug has many friends, and his best friend is Skeeter Valentine. He met Skeeter on the day he moved to Bluffington, and they've been the best of friends since then.

When Doug first arrived in Bluffington, he fell in love with Patti Mayonnaise, one of the girls in his town. They have been best friends since they met, with Doug having a crush on her. By the end of the show, Patti tells Doug how she feels about him and decides to go on a "date-date" with him. Aside from Patti, Connie Benge has had a small crush on him in the Nickelodeon series, and asked him to go to the dance with her, with him trying to make up a story for her to say no.

Doug was a usual target for the school bully, Roger Klotz, to pick on. Roger would usually play practical jokes on him and call him names. Later on, Roger stops being as mean to Doug, and they become friends. Doug also considers Guy Grahm a rival for his love for Patti, however Guy does not notice this.

Doug's biggest flaws are pride and jealousy. His pride can usually cause him to deny anybody is better than him at anything such as Skeeter being genius and his pride can bring out the worst in him.

During Doug's many fantasy sequences, he took on the personality of many characters. The most famous one in the series was Quailman, which was a superhero that was just Doug wearing his usual outfit, but with a red "Q" on his sweatervest, a belt on his head, and briefs on the outside of his pants. Unlike most superheroes he often tried to fight without using physical force. Quailman is also a parody of Superman.

Another alter-ego of Doug was Smash Adams, a parody of James Bond. Adams was already a movie character in Bluffington, so Doug's fantasies were just him taking on the role. When Doug played Smash Adams, he usually had his hair slicked back, wore a white (or on some occasions, black) tuxedo, and spoke with a British accent.

Doug's third alter-ego was Race Canyon, a parody of Indiana Jones. Canyon only appeared four times in the series, with only one of the episodes being from the Disney series.

An earlier costumed version of Doug has appeared at Nickelodeon Studios (which was in Universal Studios Florida until Nickelodeon Studios' closing in 2005) for special events from 1991 to 1995, when Nickelodeon still owned most of the rights to the show. As such, Doug was dressed in his Nickelodeon attire in Disney parks.

Doug at the Disney-MGM Studios. 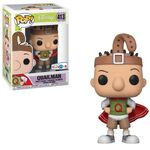 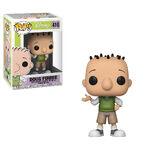 Doug and Skeeter The two girls