Laurie Pontoni 2014-present
Doug Jones is an American actor, contortionist and mime. He is known for his frequent collaborations with Guillermo del Toro in the movies, Mimic, Hellboy, Pan's Labyrinth, Hellboy II: The Golden Army, Crimson Peak and The Shape of Water. He is usually hired for his tall lanky appearance and his proficiency for performing characters in heavy make-up in movies such as Batman Returns, Mystery Men, Doom, Lady in the Water, Legion, The Bye Bye Man; and television shows such as Arrow, The Flash and Star Trek: Discovery.

For Disney, he portrayed Billy Butcherson in Hocus Pocus and voiced the Wereduck in DuckTales. He played Dominique Wilkins in the ABC sitcom The Neighbors and a Slapstick Actor in The Young Indiana Jones Chronicles. For 20th Century Fox he played a Yeti in Monkeybone and the Silver Surfer in Fantastic Four: Rise of the Silver Surfer. 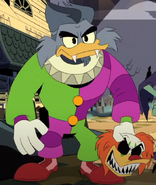 Wereduck
(DuckTales)
Add a photo to this gallery
Retrieved from "https://disney.fandom.com/wiki/Doug_Jones?oldid=4274992"
Community content is available under CC-BY-SA unless otherwise noted.