Short, scrawny-limbed Brain with round glasses

"As they say in the city my friends, I believe we are quite Durfed."
"The shallowness of the popular crowd never ceases to astonish!"
Douglas McNoggin[1] is a close friend of Lloyd's and a main protagonist of the animated series, Lloyd in Space. He is a member of the Cerebellian race.

Douglas McNoggin was born to Walter McNoggin and his wife in the year X14. It is unknown whether he and his family lived on their homeworld of Cerebella or Intrepidville when Douglas was born. In the year X21 Douglas met his three best friends; Eddie, Lloyd and Kurt, the latter whom would be his best friend for years to come, in 1st grade. He was also one of three kids who did not laugh at Lloyd when he made a fool of himself in front of everyone on his first day.

Douglas is an intelligent and intellectual boy, possessing knowledge so vast it leaves his friends baffled most of the time. However because of his love for science he has been labelled a "dork" and a "nerd" by many of the kids at Luna Vista. Douglas is in someway Kurt's polar opposite: Where Kurt is big, strong but quite dim, Douglas is small, scrawny but sharp-tongued. Douglas seems to be the voice of reason for the group as he believes that he and his friends should keep their noses out of trouble. Of course it doesn't take much from Eddie to convince him to join in on their schemes. 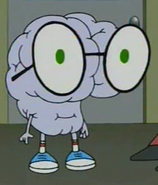 Retrieved from "https://disney.fandom.com/wiki/Douglas_McNoggin?oldid=3513123"
Community content is available under CC-BY-SA unless otherwise noted.