For Disney, she is best known for playing Jess in the British TV show, The Lodge along with her ex-boyfriend, Thomas Doherty, as well as Liv and Maddie Rooney in the Disney Channel Original Series Liv and Maddie. In 2014, she played Kayla Morgan in the Disney Channel Original Movie Cloud 9. In 2015, she guest-starred, along with Ryan McCartan (who was also her fiancé),[1] in an episode of Austin & Ally. She also portrayed Maleficent's daughter, Mal, in the Descendants franchise. Additionally, she voiced Spider-Gwen in Ultimate Spider-Man and Marvel Rising: Secret Warriors[2] and played Ruby Hale in Agents of S.H.I.E.L.D..

She also is well-known for her role as Amber Von Tussle in the NBC TV series Hairspray Live!, and voiced Ella in The Angry Birds Movie 2. She also voiced Becky Smoochenbacher in the second season (and series) finale of LEGO Star Wars: The Freemaker Adventures.

Cameron was born Chloe Celeste Hosterman on January 15, 1996, in Bainbridge Island, Washington. She is the daughter of Philip Alan Hosterman and Bonnie Wallace, who later divorced, and has a older sister, Claire Hosterman. When she was a child, she attended Sakai Intermediate School. At age eight, Cameron began acting in community theater at Bainbridge Performing Arts. When she was fourteen, her family moved to Los Angeles, California, where she sang in Burbank High School's National Championship Show Choir.

Cameron has stated that she is of French descent and that she speaks some French. She also has Russian, Slovak and Hungarian ancestry. She has said she was bullied throughout her entire school experience, from fifth grade through the end of high school. Regardless of the pressure at school and fitting in, she stayed focused on her dreams of achieving success in entertainment: "I became very passionate about becoming an actress and singer. I fully immersed myself". Her father died in 2011 when she was 15. Following his death, Cameron changed her legal name to Dove in honor of her father who called her by that nickname.

Liv & Maddie Rooney
(Liv and Maddie and Best Friends Whenever) 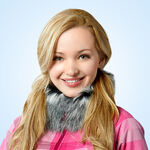 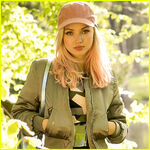 Dove Cameron at the premiere of Descendants in July 2015.

Dove Cameron singing I Put a Spell on You alongside Sofia Carson and Jordin Sparks in The Hocus Pocus 25th Anniversary in 2018.