Tall, slender with pale skin, black short hair (though he has a few grey hairs on his temples), a black goatee, as well as a distinctive green eye shaped like the eye of a feline, ash-grey suit, white shirt, black tie and black shoes.

Bad (on the TV show)
Neutral (in real life)

Various cats (on the TV show)

Being humilliated, dogs (on the TV Show)

Escapes the fire and continues working on the show

"Are you crying? Is it because I kidnapped your daddy? Or because I hurt your precious little dog?"

"You are beginning to irk me, professor. I am irked, and that will not do."

Dr. Cecil Calico is a character in Disney's 2008 movie Bolt. He is the main antagonist of the in-universe Bolt TV show, and by extension the film's video game tie-in. Though he isn't an actual villain, but merely an actor, Bolt thinks he's really a villain and promises to get him for real.

Dr. Calico is among the most ruthless, cunning and merciless villains ever seen in the Disney universe. Always accompanied by one or more cats, he is a master of planning and a brilliant strategist. Ruthless, yet patient, he likes to torture his enemies in order to force them to do his bidding. Although he is seen always hiding behind his guards, he is not above killing his enemies with his bare hands; this is seen in the show when he tries to kill Penny after she had surgery by attempting to inject her with some sort of fatal drug. In the video game, his personality seems more evil and sinister than in the film.

Dr. Calico is first seen on video with Penny's father captive, talking to one of his associates as Penny and Bolt spy on him. As the associate tries to leave, Penny and Bolt capture and interrogate him, learning of Calico's base in Bolivia.

Later, the cats portraying Calico's cats sneak into Bolt's trailer and mock him, mentioning that Calico has a plan and that he will execute that plan and then execute Penny.

Calico does not appear in person until the next day's shooting, where he appears with his cats and confronts Penny and Bolt (who have infiltrated his Bolivia base). He imprisons Penny in what appears to be a portable toilet and flies away, laughing maniacally.

Calico is mentioned several times throughout the film. When Bolt attempts to break free, he spots the prop of the toilet Calico used to abduct Penny and tries to smash his head through the window to access it, but fails. Also, when he arrives in New York by mistake, he notices a man who looks like Calico from the back. Bolt tries to knock the man unconscious, but all Bolt does is simply tap the man on the shoulder. Following this, Bolt notices a truck containing a portable toilet resembling Calico's, proceeding to intercept the truck.

After meeting up with some street pigeons, Bolt mentions that he is tracking down Calico. The pigeons lead him to Mittens, since Calico has a fondness for cats. Bolt then interrogates Mittens, demanding that she tell him where Calico and Penny are.

After Rhino and Bolt break free from the animal control truck, Rhino motivates Bolt using several of Calico's plots as an example.

When Bolt arrives in Hollywood, Calico is seen once more, showing a captive Penny to her father. She calls for Bolt, and his lookalike arrives, much to Calico's shock as he shrieks, "GET THAT DOG!!!" Unfortunately, Bolt's lookalike is spooked by Calico and his minions and flees the set, setting fire to the area and forcing Calico and the crew to leave.

Calico is revealed to have escaped the studio as he, while disguised as a medic at the hospital in the TV show, sneaks up on a new Penny with a possibly deadly drug. However, a new Bolt destroys the syringe and rescues Penny, but they are abducted by aliens as Calico looks up and clenches his fist at the aliens.

Calico returns in the short, once again as the main antagonist. Here, he captures Penny and Bolt and prepares to dip the both of them in lava. Unknown to Calico, though, Penny's father overhears Calico gloating over his dome-shaped base and defenses via Bolt's collar, prompting the scientist to infuse Rhino with Bolt's powers and send him to rescue Penny and Bolt.

Rhino arrives at the base and proceeds to smash his way through Calico's defenses, eventually using his laser vision to break into the dome. After a brief conversation with the enhanced hamster, Calico unleashes a barrage of missiles and artillery, but Rhino hops on one of the missiles. As the missile trails onward, Rhino destroys the rest of the artillery and rescues Penny and Bolt, sending the missile towards Calico. Calico rises from the rubble and swears revenge, but Rhino promptly finishes Calico off with a super-squeak. A defeated, but burnt Calico tells himself that he didn't know Rhino would do that.

Calico also appears as the main antagonist of the video game, which is inspired by the film's in-universe TV show. As a result, he is more fleshed out as a character.

After capturing Penny's father on the show, Calico then pursued the one thing that would get him to cooperate, Penny. Calico finally managed to capture Penny once she and Bolt found his temple base in the Yucatán jungle. To prove Penny was alive and in custody to her father, Calico gave Penny a cell phone with her father on the other line. Calico then attempted to flee the crumbling temple with his new captive, but decided to leave her there with Bolt to die, saying, "As long as the professor believes she's alive, he will do what is asked and finish the weapon. Too bad we can't all have nine lives."

However, Penny and Bolt survived and discovered Calico's new base in Northern Russia, containing a large rocket. But upon entering, Penny notices micro-focusing mirrors and realizes that it is her father's satellite instead of a warhead. All too late as Calico seals the entrance and, to Bolt's horror, launches it with Penny inside. Bolt then jumped onto the rocket and dismantled it in mid-flight, crashing it into the snow.

The two then ventured to Calico's harbor in China, where they discovered a ship full warheads. Just then, Calico arrived at the harbor, enraged and surprised to find Penny still alive, and even more so as he watched his prized freight ship sink into the water, thanks to Bolt, who then pursues Calico, escaping in his car to a nearby train station. He arrives at the station and boards his train, closely followed by Penny and her dog. Just as the duo finally corners the doctor, he slips into a hidden room and escaped on his private jet, but not before Penny secures a homing beacon onto the hull, leading them right back to Calico's base.

Penny and Bolt traced his jet back to his main base, where Penny's father was being held. However, upon arriving, Calico used his new weapon on Bolt, draining him of his powers and strength and capturing Penny. Once Penny is inside, he explains his plan to use Penny's father's micro-focusing mirror-equipped satellites to bounce a beam around the Earth and neutralize and destroy all atomic weaponry except for his own. And as he leaves, he violently kicks Bolt's cage proving Penny of her limited knowledge. However, during this, Penny maneuvered her way out of her hand bindings.

Once free, she attempted to find her father to save Bolt. Unfortunately, she is only captured by the doctor once again, just as Bolt regains his powers and Penny sabotages the control panel, however, raising the bridge so Bolt could reach her. Once he did, Penny escaped from her guard captors yet again and launched a prepared, rocket powered cart at the main power generator (which Bolt exposed). Calico then infused himself with the remaining power and dueled with Bolt, but was ultimately defeated. Beaten and weakened, he attempted to escape on his private helicopter, launching numerous missiles as a decoy, just as Penny finally finds her father (aboard the helicopter). But while Bolt tried to apprehend Calico by grabbing his foot, Penny's father pleads to her and Bolt to allow Calico to escape with himself to stop the missiles, reminding her that she had the power to find him again. Regretfully, Penny ordered Bolt to stop the missiles as Calico escaped with her father.

Dr. Calico and one of his feline minions 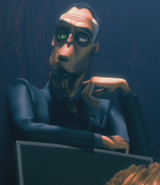 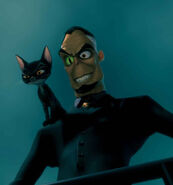 "We only need the girl"

Taking off with Penny

Retrieved from "https://disney.fandom.com/wiki/Dr._Calico?oldid=3756891"
Community content is available under CC-BY-SA unless otherwise noted.