Disney Wiki
Register
Don't have an account?
Sign In
Advertisement
in: Characters, The Nightmare Before Christmas characters, Anti-heroes,
and 20 more
English

“Nothing's more suspicious than frog's breath! Until you taste it, I won't swallow a spoonful!”
―Finkelstein suspects Sally of attempting to poison him[src]

Dr. Finkelstein is a major character and minor antagonist in Tim Burton's 1993 stop-motion Disney film, The Nightmare Before Christmas. He is a wheelchair-bound mad scientist residing in Halloween Town, and the creator of Sally and Jewel Finkelstein. Throughout the film, he attempts to calm and restrain Sally against the outside world, while also helping Jack Skellington take Christmas. Too frustrated with his creation, Finkelstein abandons Sally and begins designing a new being, later revealed to be Jewel.

Dr. Finkelstein is a pale-as-a-sheet mad scientist with a duckbill-like mouth and a hinged skullcap that he can open up to reveal his brain. For unknown reasons, he uses a motorized wheelchair. Dr. Finkelstein lives in a large observatory with his living rag doll creation, Sally, and his hunchbacked assistant, Igor. James Whale's Frankenstein is quoted in Finkelstein's line, "I made you with my own hands," which is ironic as Finklestein's body appears to be largely if not entirely artificial. Unlike Frankenstein, who takes no responsibility for his creations and disowns them almost as soon as they are completed, Finklestein takes full responsibility for Sally and acts as an over-protective father figure, by keeping her under lock and key under the pretext of sheltering her from the world.

He also has a passion for inventing, and, though generally portrayed as grouchy, is shown to be extremely friendly towards Jack Skellington, and is always eager to assist him.

Dr. Finkelstein is a frail-looking person, with thin, spindly limbs and very small hands and feet, but a disproportionately large head. He is confined to a black, electric wheelchair that seems to be rather old and difficult to operate. The chair is almost entirely metal and lacks any sort of cushioning, and it sports two levers, one on either armrest, that Finkelstein uses to move it. Finkelstein himself dresses in a long white lab coat that buttons up on the right side, pants of the same color, black shoes, and black gloves that are a good deal wider than his arms. His skin is an unhealthy white color and he has small, beady black eyes, normally covered by his goggles, as well as thin black eyebrows. His mouth is beak-like in structure and he seems to be missing a few teeth. Finkelstein's ears and nose are so small as to be almost nonexistent, and his nostrils point forward. Easily, Dr. Finkelstein's most prominent feature in his skull, which bears several obvious bolts and a clear horizontal seam going around the middle. Finkelstein can literally flip his skull open via a hinge in the back, exposing his pink brain, which he often scratches when attempting to figure something out.

Doctor Finkelstein lives in a large observatory with his living rag doll creation Sally and his hunchbacked assistant Igor. James Whale's Frankenstein is quoted in Finkelstein's line "I made you with my own hands" which is ironic as Finklestein's body appears to be large if not entirely artificial. Unlike Dr. Frankenstein, who takes no responsibility for his creations and disowns them almost as soon as they are completed (much like the original Dr. Frankenstein), Finklestein takes full responsibility over Sally and acts as an over-protective father and in some ways like an overbearing husband (thus explaining Sally's attempts to run away) by keeping her under lock and key under the pretext of sheltering her from the world. In addition to being an overbearing and antagonistic father figure for Sally to overcome, Finklestein also has a hand in helping Jack Skellington (of whom he is apparently very fond) with his plan to take over Christmas by bringing to life several skeletal reindeer to pull Jack's sleigh. Near the end of the film, Finkelstein, deciding that Sally is too much of a handful, creates a wife for himself using a portion of his own brain, which he finishes at the end of the movie.

The Nightmare Before Christmas: The Pumpkin King

Dr. Finkelstein appears in the game and rewards Jack a Bat Boomerang.

Dr. Finkelstein is featured in The Nightmare Before Christmas: Oogie's Revenge. When Jack is tired of doing the same thing at Halloween, Dr. Finklestein helps him by giving him the Soul Robber, a weapon that allows Jack to change its shape. Jack also tells Dr. Finkelstein to watch over the town while he is away. After Oogie Boogie's revival, Dr. Finklestein was under Oogie's control by switching his brain to a different one and created monsters that obey Oogie Boogie's every command. Fortunately, Jack was able to put Dr. Finkelstein's original brain back in place making Dr. Finklestein break from Oogie's control. In the game spin-offs, Finkelstein's name is pronounced "steen" instead of "stein". For some reason, his wife creation "Jewel" is not present in the game, and Sally appears to still be living with him even though in the movie she appeared to be free at the end. Sally even says "He insists on keeping me locked up" while next to the Hanging Tree in the Graveyard. 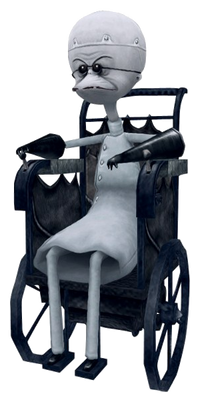 In the Kingdom Hearts video game series, Finkelstein appears as a Mad Scientist in his homeworld Halloween Town.

In Kingdom Hearts, the Heartless arrive in Halloween Town; Finkelstein, fortunately, finds a book with information on them. He creates a guidance system that pacifies the Heartless, making them harmless enough to be used by Jack for that year's Halloween. Unfortunately, an explosion damages the guidance system, and their attempts to enhance and repair it with an artificial heart causes the Heartless to go bonkers. Despite trying to refine the artificial heart, Finkelstein has it stolen from him by Lock, Shock, and Barrel; they give it to Oogie who swallows it to control the Heartless. Unfortunately, the heart proved faulty and Oogie faded into darkness. Finkelstein was left to finally accept he had no idea what made up a heart.

In Chain of Memories, he appears as a figment of Sora's memories. This time, his invention is a potion created from Forget-Me-Nots; however, his simple smelling of the potion caused Heartless to appear. The reason for his invention is to prove that what is remembered isn't actually the truth; in other words, he wished to retrieve "true memories". The potion was stolen by Sally, who feared what else could appear if the potion was actually drunk by someone. Oogie snatches it and swallows it whole; unfortunately, it overwhelmed him with the memory of his demise. The bottle was returned to Finkelstein, who lamented over a few drops remaining; Sora turned down the offer to finish the potion since he promised someone that he would find his true memories on his own.

In 358/2 Days, Finkelstein is helping Jack with his new ideas for Halloween on Roxas's second visit to Halloween Town, examining Jack's Heartless-filled balloons; he also creates pumpkin bombs that explode into freezing blasts. He compliments Jack for taking in new ideas from the world around him, since its the key skill needed for any researcher. He lastly appears when Jack shows off a scarecrow modeled after Roxas, which is intended as Halloween's centerpiece.

In Kingdom Hearts II, Dr. Finkelstein is working on a robotic creature with the help of Lock, Shock, and Barrel. Eventually, however, their mischievous ways are annoying him as the trio soon tossed the robot arm on the table causing it to explode, and angrily called them "imbeciles". Later on, Finkelstein has finished his experiment and tries to bring it to life but doesn't work. Finkelstein believes the Experiment to be a failure and decides to find "better assistants". However, just as he turns around to start new designs, the creation comes to life and attacks the doctor, leaving him unconscious in his laboratory. After regaining conscious, Dr. Finkelstein pleads for help that his experiment is missing. When he tells Jack and friends the full story Sora believes the Heartless might have taken the experiment, in which the doctor tells him that it was nothing like a Heartless. After defeating the Experiment, they return back to Halloween Town and tell the doctor that the experiment wasn't stolen, much to his surprise, and concluding it was an "overwhelming success." Sora then says that Santa Claus theorizes that the machine left because it was probably looking for a heart, in which Dr. Finkelstein agrees, stating that he did not give the creature a heart of its own, as he did with Sally, and returns back into his lab.

During the End Credits, Dr. Finkelstein along with everyone else in the lab listening to Jack discussing plans for next Halloween.

In 2003, along with the other The Nightmare Before Christmas characters, Dr. Finkelstein made a special, one-time appearance in Disneyland for the Haunted Mansion Holiday opening event.

The Disney Wiki has a collection of images and media related to Dr. Finkelstein.