Finally spends time with his daughter and has a tea party with her and the fairies.
Dr. Martin Griffiths[1] is Lizzy's father and the (former) main antagonist of Tinker Bell and the Great Fairy Rescue. He was voiced by Michael Sheen.

He appeared to be very ignorant as he hardly did anything with Lizzy until the end of the film, where he learned that he needed to spend more time with her. He was the antagonist of the film, but out of ignorance, as his pushing his daughter away was motivated by his love for his work and his disbelief in fairies and magic. He has a large collection of preserved dead butterflies, and while he spares a little sympathy for them, he believes their sacrifice is needed for the sake of science. For this same end, he attempts to pin and preserve another butterfly in the beginning of the movie and do the same to Tinker Bell (and Vidia when she rescues her) near the end, but is prevented from doing so when his daughter and the fairies give chase. 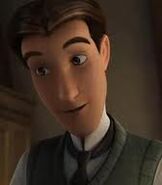 Retrieved from "https://disney.fandom.com/wiki/Dr._Griffiths?oldid=3239168"
Community content is available under CC-BY-SA unless otherwise noted.