Marion Ross (Guardians of the Galaxy)

Maria Rambeau outmaneuvers her and shoots her down above the Mojave Desert, killing her
Dr. Minn-Erva is a Marvel Comics character that appeared in Guardians of the Galaxy, voiced by Marion Ross, and in Captain Marvel, played by Gemma Chan. She is one of the greatest scientific minds in the Kree Empire, with her achievements in genetics and chemistry being unprecedented among the Kree. Her Kree physiology gives her superhuman strength and invulnerability.

Dr. Minn-Erva fights alongside Captain Marvel before she defects.

Dr. Minn-Erva in Guardians of the Galaxy 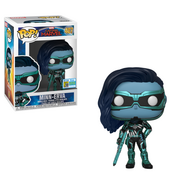 Retrieved from "https://disney.fandom.com/wiki/Dr._Minn-Erva?oldid=3994223"
Community content is available under CC-BY-SA unless otherwise noted.