Fire breath (most of them)
Flight (some of them)
Dragons are legendary creatures, typically with serpentine or reptilian traits, that are featured in the myths of many cultures.

There are two distinct cultural traditions of dragons: the European dragon, derived from European folk traditions and ultimately related to Greek and Middle Eastern mythologies, and the Chinese dragon, with counterparts in Japan, Korea and other East Asian countries. There is also the American/Canadian dragon, a dragon depicted as having characteristics from other dragons, as well as lacking arms.

Dragons are usually shown in modern times with a body like a huge lizard or a snake with two pairs of lizard-like legs, and are able to emit fire from their mouths. The European dragon has bat-like wings growing from its back. A dragon-like creature with no front legs is known as a wyvern. Following discovery of how Pterosaur walked on the ground, some dragons have been portrayed without front legs and using the wings as front legs pterosaur-fashion when on the ground.

Although dragons occur in many legends around the world, different cultures have varying stories about monsters that have been grouped together under the dragon label. Some dragons are said to breathe fire or be poisonous. Some live in water as well. They are commonly portrayed as serpentine or reptilian, hatching from eggs and possessing typically scaly or feathered bodies. They are sometimes portrayed as having especially large eyes for watching treasure very diligently, a feature that is the origin of the word "dragon" (Greek drakeîn meaning "to see clearly"). Some myths portray them with a row of dorsal spines. European dragons are more often winged, while Chinese dragons resemble large snakes or serpents with legs and whiskers. Some other types of dragons also exist in legends around the world; the knucker is a small-winged, four-legged water dragon seen in western mythology, while the wyrm (sometimes spelled "wurm") is a great, legless dragon resembling nothing less than a large, horned snake with great crushing coils. Several variants exist of this type of dragon, including the legendary Python of Greek legend (for which true python snakes are named) and the English dragon known as the Lambton wyrm. yet another dragon from Norse, Sweden and Danish mythology is the Lindworm (sometimes spelled as "Lindwyrm", "Lindorm" or Lindom"), which is serpentine with two front legs and no wings. Amphipteres are another dragon variant, and are essentially winged serpents with no legs.

In the Disney Universe, dragons are usually anthropomorphic creatures themselves, or people magically turned into dragons. However, some, like the dragons in Adventures of the Gummi Bears and Tangled: The Series, are wild animals as well, such as the brine dragon, cliff dragon and the malevolent Chinese dragon as well as the dragon named Little Big Guy that appear in these respective series. The dragon in Tangled: The Series also adds the ability of dragons to take on attributes from people they've been in contact with as well as giving people or other beings the dragon's abilities in return. 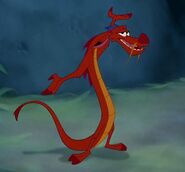 Retrieved from "https://disney.fandom.com/wiki/Dragons?oldid=4442133"
Community content is available under CC-BY-SA unless otherwise noted.