1
Jared Drake Bell is an American actor, singer, songwriter, and musician, who is best known for his work on the teen network Nickelodeon, including appearing in the live-action sketch comedy and variety show, The Amanda Show and for his roles as Drake Parker in Drake & Josh and Timmy Turner in the The Fairly OddParents live-action movies.

For Disney, he voiced Peter Parker/Spider-Man in the Marvel animated series, Ultimate Spider-Man (in which he also voiced Spider-Punk), The Avengers: Earth's Mightiest Heroes, Hulk and the Agents of S.M.A.S.H., Avengers Assemble, and the Phineas and Ferb crossover episode, "Mission Marvel". He also did the voice of the younger version of Master Eraqus for the video game Kingdom Hearts III. In addition, he played Kirk Kelly and reunited with Josh Peck in the Fox/ABC Studios TV show, Grandfathered, Little Pete in Home Improvement, and young Rob Gordon in the 2000 Touchstone Pictures film, High Fidelity. 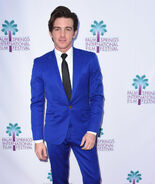