To kill Ronan the Accuser

“Nothing goes over my head, my reflexes are too fast.”
―Drax

Drax the Destroyer is a member of the Guardians of the Galaxy. In the 2014 film, he is portrayed by Dave Bautista.

Drax has a personal vendetta against Ronan, who killed his family. Now fueled by pure rage, Drax will stop at nothing to take his revenge on the most dangerous being in the galaxy. Eventually, Drax was sent to the Kyln after killing dozens of soldiers and followers of Ronan. When Gamora was sent to the Kyln; Drax believed that killing Gamora, he finally have revenge that he craved.

That same night, Moloka Dar and other prisoners took Gamora to the showers to murder her. When Moloka Dar was about to kill Gamora, he interrupts and asks if he knows who he is. Moloka Dar recognizes and gives him a knife to murder Gamora. However, Star-Lord stopped him when he made him realize this would accomplish nothing. Soon he became part of Star-Lord's group and were soon figuring out a way to escape the prison.

Before the meeting with the Collector , Drax with Rocket and Groot got along pleasantly until he and Rocket got drunk and started arguing. While the others discovered that inside the Orb was a Infinity Stone, Drax informed to Ronan where they were. Drax says why who wanted to kill him but Ronan said not to remember them. After the talk followed by a brief fight, Ronan wins easily and decides to throw Drax in a tank filled with a yellow liquid. However, he is later rescued by Groot.

During the battle to save Xandar, Drax and his teammates were introduced to Ronan's ship to attack in the way defeated Korath and many soldiers Sakaarans. When they were about to be killed by Ronan, Rocket came and crashed the Milano. About to explode the Dark Aster, in a heroic act Groot sacrificed to save Rocket and their new friends. They survived the explosion as Ronan but luckily it, Drax and Rocket destroyed the Universal Weapon revealing the Infinity Stone.

Quill inmediately grabs the Orb, who was nearly killed by the power of the Stone. Then Gamora gives her hand to Quill followed by Drax and later Rocket and so direct the power of the Orb to kill Ronan. After the battle, he says that Ronan was a puppet of Thanos and Thanos would to be the next. Once in the Milano, Groot is seen dancing with the music "I Want You Back" by "The Jackson 5", freezing whenever Drax looked his way. 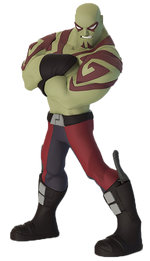 Drax appears alongside the rest of the Guardians in the Disney INFINITY: 2.0 Edition Guardians of the Galaxy Play-set by protecting Knowhere from Ronan the Accuser and his Sakaaran forces.

The Disney Wiki has a collection of images and media related to Drax the Destroyer.

Retrieved from "https://disney.fandom.com/wiki/Drax_the_Destroyer?oldid=1697081"
Community content is available under CC-BY-SA unless otherwise noted.