Gummi Bears, Cavin, Calla
Castle Drekmore is a location in the television show Adventures of the Gummi Bears.

Castle Drekmore is also called is an castle-like fortress utilized by Duke Sigmund Igthorn and his army of Ogres. It is considered Igthorn's stronghold, and despite Igthorn's absolute disregard for the territory of other kingdoms most neighboring realms, seem happy enough to let Sigmund rule over Castle Drekmore.

The Gummi Bears have occasionally entered Castle Drekmore in order to stop one of Igthorn's many schemes, this is also the place where Igthorn is most likely to take any unfortunate individual he seeks to imprison: the castle having many dungeon chambers by which to store said prisoners.

In the episode "Can I Keep Him," Zummi gives Cubbi a whistle from his old treasure chest while Sunni is having trouble baby sitting Cubbi. The whistle attracts a brine dragon, which takes Sunni and Cubbi on an unexpected adventure to Drekmore Castle.

In the series finale "King Igthorn", the Gummi Bears have been spying on Castle Drekmore. When they see that it has been abandoned for one year and neither Duke Igthorn nor the Ogres have been seen anywhere, the Gummis conclude that Igthorn has moved on and signal the expatriate Gummi Bears in Berryborn, Great Bearton and New Gumbrea that it is safe to return to Gummi Glen. 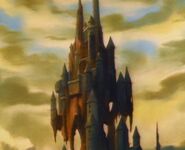 Map of Drekmore
Add a photo to this gallery

Retrieved from "https://disney.fandom.com/wiki/Drekmore_Castle?oldid=3886253"
Community content is available under CC-BY-SA unless otherwise noted.